Sabré Cook: “Don’t let the fear of failing hold you back” 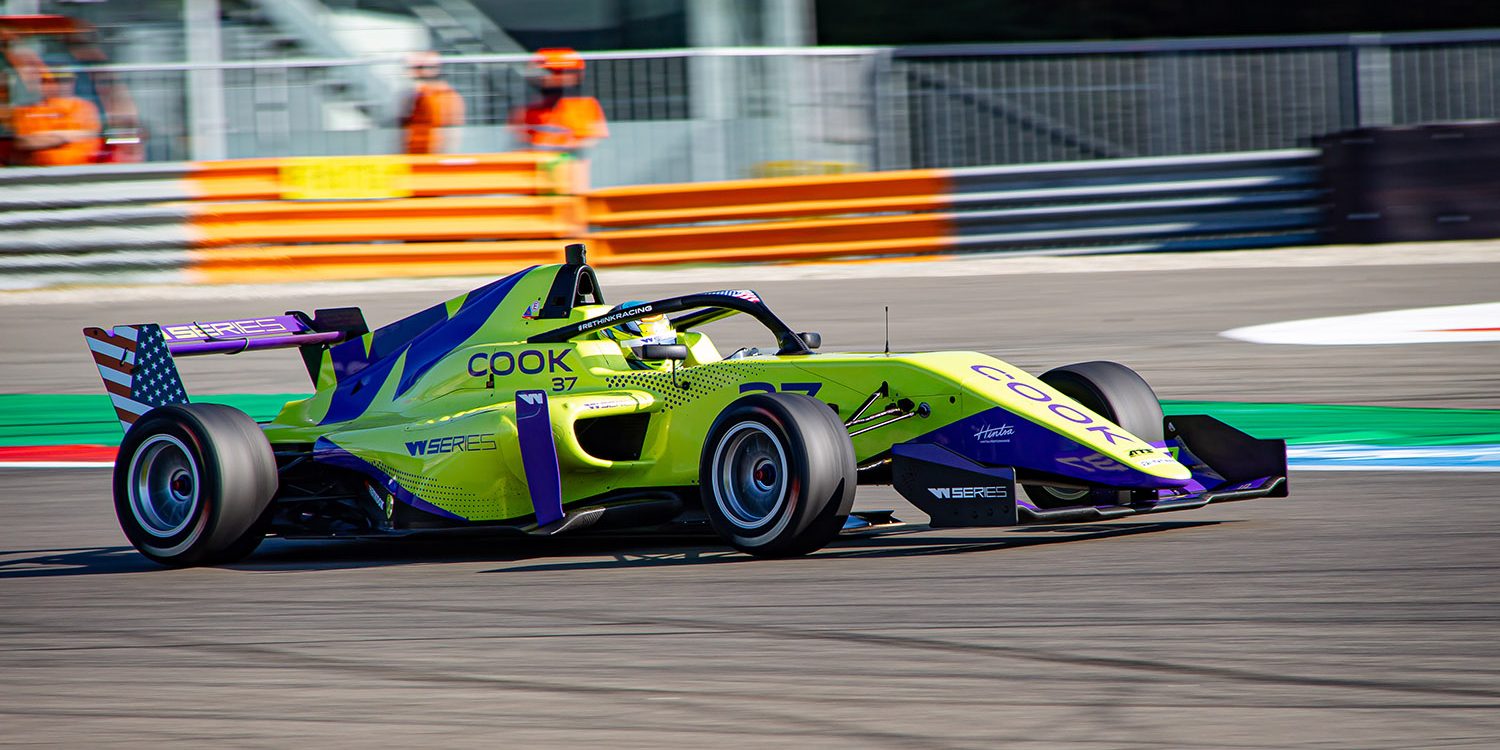 Sabré Cook is a 25 year old female racer from America who will compete in both the W Series and the Road to Indy this year. Trackside Legends contributor Marlon Harms had an exclusive interview with Sabré. She talked to us about her dreams in motorsports, the first season of the W Series and her passion for engineering.

Just like many people involved in motorsport, be it drivers, mechanics or fans, she started racing because of her father. ”He used to race motocross and super cross professionally back in the 80’s, and after he retired, he stumbled onto karting. He and my mom didn’t want us racing motorcycles because the safety risk is higher, so they got my brother and I into karting when I was 8.“

Growing up, she looked up to her father a lot. When she got older and learned more about higher forms of racing, other role models were Ayrton Senna, Mark Webber, Helio Castroneves, Lyn St. James, Janet Guthrie and Scott Dixon.

“It’s purely a platform to empower, develop and help women move into higher levels of racing”

2019 was a big year for Sabré. A new single seater series was launched – W Series, a series only for women. When it first got announced, the racing world had lots of different opinions on it. Fair to say in the beginning we heard more negative opinions than positive ones. So, of course we had to ask her when she first heard about the series and what her reaction was to the news.

“I’d heard rumors of an all-female series starting up the year prior to W Series being announced and I was honestly apprehensive about it.” She continues: “Luckily I had great people around me that helped me see what a great opportunity it was and eventually I came around and decided to try and get involved.”

With success, because more than 100 women from all over the world applied for the series. Sabré was one of the 18 lucky ones to be awarded a place on the 2019 grid. Initially, she thought that critics felt women weren’t good enough and needed their own series. Therefore, we at Trackside Legends were wondering if her opinion changed after completing the first season.

“My opinion changed long before the season even started. Any doubt I had left was erased at the first selection event in Melk, Austria when David Coulthard and Catherine Bond-Muir shared their stories and why they started W Series.” She explains that it’s purely a platform to empower, develop and help women move into higher levels of racing and perform better.

For drivers, it can sometimes be a bit difficult to get used to a new series with new cars. That was also the case for Sabré. It was a season with mixed results but also some very positive moments.

The W Series season started off with a 13th and 15th place at Hockenheim and Zolder. The next two races, at Misano and the Norisring, she finished 8th and 7th. In Assen and during the season finale at Brands Hatch she finished 13th and 9th.

Of all drivers on the grid, she was the one with the least number of races under her belt. So obviously, that was already a challenge itself. “I had a few good point finishes, such as the reverse grid podium and I won the award for the most passes during the season. So, for those things I can be happy, but I know there’s a lot of room for improvement this year.”

In the end, Sabré finished the season in 12th place. That meant she was guaranteed a spot on the 2020 grid, without having to go through the new selection process.

Born in America, she grew up karting and racing in the USA. The W Series only raced in Europe in 2019, something that will change this year. But it wasn’t the first time for Sabré in Europe, as she did kart here already. When asked what the biggest difference between the two continents is, she said: “The biggest difference I’d say is the atmosphere at a European race. Motorsports is so much more a part of everyday life in Europe than it is in the States and can create a more serious and highly competitive environment.”

She used these past couple of months during the winter break to prepare for the new W Series season. “This season I’ll be more prepared just from the seat time last year. I also learned where my biggest areas to improve are and I’m working very hard to make those areas stronger.”

Sabré feels like qualifying is an obvious area of improvement for her. She told us that when she can fix that and start from a better position, she has the race pace to keep going forward. “For 2020 the goal will be to score points every race, target top 5 finishes and keep improving all season.”

2019 was the first season for the series. They had six races throughout Europe as a support series of the DTM. That’s quite an achievement already. But still, we were wondering if there were any specific things the series could improve on for the next years. “As a racer I’d always love more racing with a two-day race weekend. But I think W Series has already blown expectations way out of the water so it’s hard to say what they could do better.”

Sabré has only positive things to say about series so far. “They’ve already paired us with DTM and F1, the cars are great, they have a great team in place, their international engagement is fantastic, and they keep striving for more. Honestly, what more could I ask for?”

Yes, that’s right. For 2020, W Series isn’t only the support program of DTM, but also for two rounds of Formula 1. They’re joining the big guys for the Mexican and American Grand Prix. A very exciting new development. And, it’s even more exciting for Sabré to have a home race in the USA. “I couldn’t be happier that we are paired with F1 for those races!” she says. “Especially for the US GP at the Circuit of the Americas because of the great track and the people at COTA have always supported me. So, I’m excited to share that experience with them.”

She’s also equally excited for the Mexico City race to try a new track. Also, she hopes to see some of her Mexican fans there again who she remembers to be amazing from her karting days. Another great thing for her, is that she can expect a lot of support. “I know my friends and family are already setting those dates aside to come and visit the races so it’s going to be a really special time with everyone!”

Besides being a racing driver, Sabré has another passion: Engineering. As a matter of fact, after graduating in Mechanical Engineering, she won the Infiniti Engineering Academy 2018 USA. Which resulted in starting to work with the Renault F1 team. She managed to combine these two things through efficient time management and lots of support from Infiniti and the Renault team.

We asked her if her knowledge about engineering helped her in some ways or gave her an advantage over the other W Series drivers.

“In some ways I think it allows me a unique insight into the challenges we were faced with in the selection events. And perhaps a better understanding and communication with my engineers at times. During the race season however, we are so restricted on car setup changes that I don’t think it had any advantage in that respect.”

“Learn from every opportunity and keep everything in perspective. Positivity is a choice”

This new all-female series is an important development, as nowadays more girls and women get into Motorsport. Young girls who start karting show up at the racetrack and see the W Series drivers as their role models. That’s something beautiful and special. So, for all the girls and women out there, we asked Sabré if she had some encouraging words.

“For the girls thinking of getting into motorsports, I would say: go for what you want, and don’t let the fear of failing hold you back. It’s not going to be easy, there will be more lows than highs. Believe in yourself. Learn from every opportunity and keep everything in perspective. Positivity is a choice. But most of all, never give up!”

Almost every young driver who starts in motorsport, both boys and girls, dream about reaching Formula 1 someday. So, when we asked her the question if she thinks we will see a woman in F1 again, she answered: “Yes, I absolutely think you will see another woman race in F1 again. It’s just a matter of that right person getting the right opportunities and being willing to put in the work.” She told us she hopes it will be within the next 5-10 years.

Another important but somewhat controversial question we asked her, is if she thinks men and women can and should race against each other in the same series. Her answer was clear: “Yes. There’s no valid reason why not.”

And finally, we asked her to look at the future. Her ultimate goal? Making it to IndyCar! Also, she would love to race the 24 hours of Le Mans and Daytona. As an engineer, she hopes to return to F1 once she’s given the appropriate time to her own racing career. She ends with the words: “But who knows! Life has a funny way of never going to plan.”

2020 will be a busy year for Sabré: racing in the W Series, but this week she also announced she will be returning to the Road to Indy with Team Benik for a partial season of Indy Pro 2000.