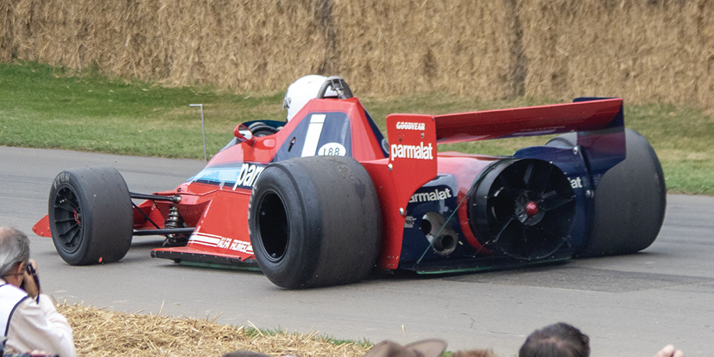 At Trackside Legends we tend to focus on the legendary people who work in the wonderful world of motorsport. But besides these human beings doing great stuff on track and at the trackside, there is another category that we want to highlight on our website, the legendary cars that we’ve seen over the years. Some hideous in hindsight, some just sheer beauties. What they all have in common is that there is a story to their looks. This first article is about the Brabham BT46B, also known as the ‘Fan-car’, hence the big fan on the back of the car. Jan Joost Folmer knows a thing or two about historic F1 cars and wrote this first article about the Brabham BT46B. Enjoy!

In 1977 Lotus team owner Colin Chapman and Peter Wright introduced their first ‘Wing Car’. They had discovered that by shaping the whole car like a wing they could speed up the airflow underneath it relatively to the airflow over the top of the car. Thus creating a vacuum under the car it would be pulled down to the track creating a huge amount of downforce. Extra benefit to this way of creating downforce is that there would be less drag from the front- and the rear wing so the car’s speed on the straights would be less compromised. The Lotus 78 was having reliability issues in the beginning but those were solved during the 1977 season, by fine tuning the ‘Venturi Tunnels’ responsible for creating the increased downforce, and in 1978 Lotus won 4 out of the first 7 races.

“Cox came up with the brilliant idea of using a fan not only for the ground effect, but mainly for cooling the engine.”

As most other constructors were quite unaware of the reasons behind the Lotus’ success it was Brabham’s Gordon Murray who finally understood what genius solution Chapman had found to create this enormous downforce. But due to the wider Alfa-Romeo Flat-12 engine in their Brabham BT46 it was not possible to have the ‘Venturi Tunnels’ needed to create the desired ground effect due to a lack of space under the back of the car.

Together with David Cox Murray was thinking of another way to create a vacuum underneath the car. They were inspired by a Can-Am sports car, the Chaparral 2J, that was nicknamed the ‘Sucker Car’. The Chaparral competed in 1970, having two fans on the backside of the car, driven by a small two-stroke engine, thus sucking the air from underneath the car which created lower pressure and higher downforce. The Chaparral 2J was very fast and Murray wanted to try a similar concept with the BT46.

So David Cox started to work on the concept of a ‘Fan-Car’. First problem he had to solve was the fact that it was not allowed to use any moving parts on a F1 car to enhance aerodynamic downforce. But as the BT45C was suffering cooling issues in earlier races that year Cox came up with the brilliant idea of using a fan not only for the ground effect, but mainly for cooling the engine. As Murray stated in an interview years after, 55% of the fans capacity was used for cooling and only 45% was used for the ground effect. This way the car would comply to the regulations. So a large radiator was placed above the engine for cooling purposes and Brabham claimed that the fan’s purpose was mainly to solve their cooling issues.

As one can imagine needed modifications to the cars were quite extensive but in the end it all seemed to work. While testing the whole thing Niki Lauda found out that his driving style had to be adapted to the ground effect. As the fan was driven by the main engine it was more effective when cornering full-throttle. So he had to get used to stepping on the gas much earlier when entering a corner.

Finally two cars (Chassis BT46/4 and BT46/6) were modified and prepared for the Grand Prix of Sweden at Anderstorp. Soon enough everyone could see the real purpose of the fans, as the car’s driving height significantly decreased when the drivers would kick the throttle. Of course other teams would protest but both cars were allowed to race, as the FIA stated they complied to the regulations. Niki Lauda qualified second behind his main competitor Mario Andretti (Lotus) followed by his teammate John Watson. The latter was not able to finish the race (spin in lap 19). Mario Andretti also dropped out in lap 46 due to a broken valve but not before Niki Lauda had passed him on the outside after they fought for the first place during several laps. In the end Lauda won the race leaving Riccardo Patrese and Ronnie Peterson behind by over 34 seconds.

Of course there were several protests about the legality of the car but the FIA allowed Brabham to race with it until the end of that season. Brabham team boss Bernie Ecclestone had some other issues on his mind though. He had been ‘Formula One Constructors Association’ secretary for several years and had shortly before been chosen FOCA president. Other FOCA teams, lead by Lotus boss Chapman, threatened to withdraw their support if Ecclestone would continue to let the BT46B compete in the championship. In the end Bernie decided to withdraw the ‘Fan-Car’ from the rest of the championship. Shortly after that decision the International Sporting Commission declared that ‘Fan-Cars’ would not be allowed anymore in F1 races.

But as the car was strictly legal during the Swedish Grand Prix Lauda’s win was not taken away from him or the Brabham team and he will remain the 1978 Swedish GP winner.

As we think technological innovation is inherent to Formula 1, we cheer for new techniques pushing the envlope. Just like the new 2020 Merecedes DAS steering wheel operated ‘toe’ system. We conclude with some great moving images of the Brabham Fan-car:

Jan Joost Folmer knows a lot about historic Formula 1 cars and likes to write about it on our platform and his own social media accounts!