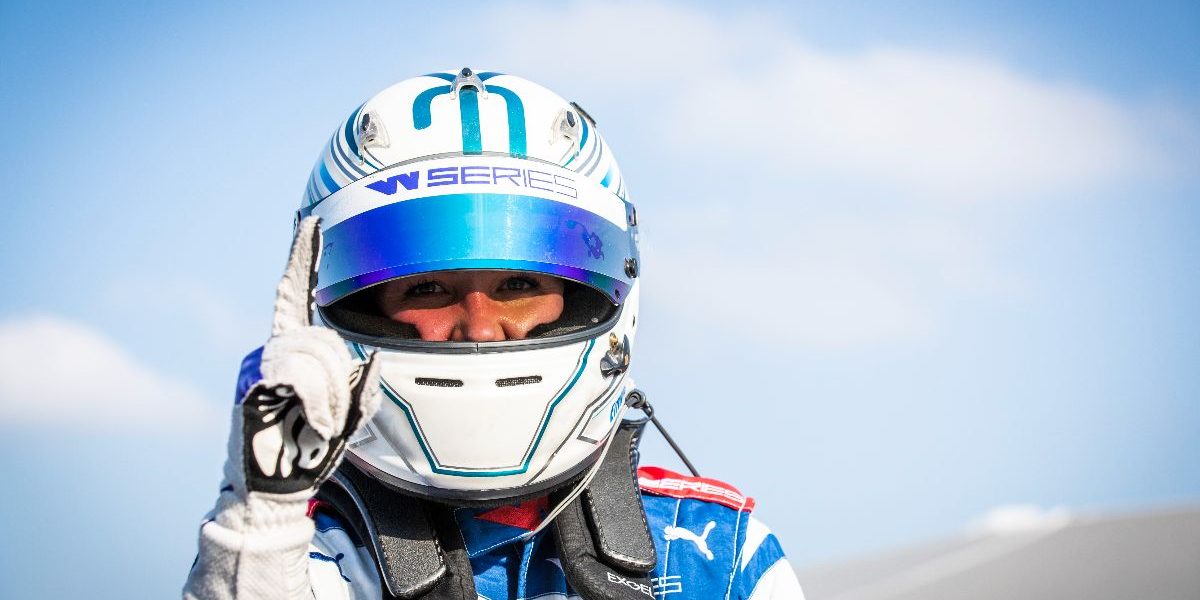 Emma Kimiläinen (Ecurie W, FIN) continued her fine form to grab pole position for the sixth round of the 2021 W Series season with her final lap of a dramatic qualifying session at Circuit Zandvoort.

“After that pole position, I am feeling confused! It was a tight fight from the beginning to the end.”

Emma – who became the third race-winner of the season with a stunning drive through the field in the rain at the Circuit de Spa-Francorchamps, Belgium, last weekend – posted a time of 1:34.326 on her final run on Friday in the Netherlands to beat Alice Powell (Racing X, GBR) by seven one-hundredths of a second. Emma’s first pole position of the season – and the second of her W Series career – had seemed an unlikely prospect just a few hours earlier when her practice session was curtailed by a technical issue, but she responded in stunning fashion.

Defending champion Jamie Chadwick was third, two tenths of a second behind Alice who she leads by seven points at the top of the championship. Emma is third in the standings, 31 points behind Jamie, but perfectly placed to close that gap on Saturday and move into title contention with two rounds remaining after this weekend at Zandvoort where W Series is supporting Formula 1’s Dutch Grand Prix.

On a warm and bright day at the Dutch seaside resort, orange-clad fans packed the grandstands to cheer on Beitske Visser (M. Forbes Motorsport, NED), who – along with her team-mate Ayla Agren (M. Forbes Motorsport, NOR) – was declared fit for her home race having missed the previous round at the Circuit de Spa-Francorchamps last weekend after being involved in a six-car incident during qualifying.

Jamie was at the top of the timing screens after six minutes of qualifying, when the session was red-flagged following Fabienne Wohlwend’s (Bunker Racing, LIE) crash at turn three. The session resumed after a 12-minute delay and, after Alice briefly hit the front, Jamie became the first driver to dip into the 1:34s to reclaim the lead.

Irina Sidorkova (W Series Academy Team, RUS) – who returned to the car after missing the race in Belgium where she tested positive for COVID-19 – spun at turn eight with just under 20 minutes left, but managed to keep it out of the gravel trap and continue, though she was under investigation by the stewards for rejoining the track unsafely.

Jamie led Emma by a quarter of a second at the halfway stage, but Emma halved the deficit on her next lap before the leading pair pitted for fresh tyres. Alice went half a second quicker than Jamie who, despite improving her best time, still trailed Alice by two tenths with six minutes remaining when the session was red-flagged for a second time when Sabre Cook (Bunker Racing, USA) beached her car in the gravel at turn 12.

That resulted in a sprint to the finish with most drivers getting just two more flying laps before the chequered flag dropped. But Emma was the only member of the top three to improve, as she took her first pole position since July 2019 when she topped qualifying at another Dutch Circuit, Assen, in W Series’ inaugural season.

Earlier in the day, Jamie was quickest in practice. Her best lap of 1:35.004 was three tenths of a second faster than Alice in second place and Abbie was third, a further half a second behind. Nerea, Beitske and Miki were the other drivers to get within a second of Jamie’s benchmark. Emma was seventh in practice despite only completing six laps – 10 fewer than Jamie – due to a cracked stud in a track rod.

Dave Ryan (Racing Director, W Series) said:
“That was a stunning last lap by Emma [Kimiläinen] to steal pole position away. It was a great effort by Jamie [Chadwick] and Alice [Powell], as normal, and it was also good to see Nerea [Martí] up there. It was a pretty good session, but it is a track that can bite you, as we saw, so tomorrow is going to be really interesting. Emma did a really good job and it looked like it was just about getting the tyres turned on at the right time, so she absolutely nailed it right at the end there. She had a mechanical failure this morning and lost track time as we couldn’t fix the issue in the pit lane, but she has more than made up for it this afternoon.”

Emma Kimiläinen, 32, Finland, Ecurie W, said:
“After that pole position, I am feeling confused! It was a tight fight from the beginning to the end. My engineer didn’t say anything to me for the entire final lap and then, right at the end, he said: ‘you’ve finished P3. No, wait, you are P1! Emma, you are on pole!’ I was relieved as I felt like I had driven a good lap, pushing so hard. Unfortunately, I made a little mistake in sector three, so I felt on edge as to whether I had achieved pole. I was just waiting and hoping that I might get it.

“The car felt amazing, and the team did an incredible job today. I am thrilled since I hardly participated in practice, only completing a few laps due to a technical issue. I am feeling confident and happy about tomorrow. I love this track and it’s going to be awesome. While Spa was exceptional, I equally enjoy Zandvoort and, after last week’s win, I feel like I have gained great momentum.”

Alice Powell, 28, UK, Racing X, said:
“I’m disappointed as, of course, I would like to be on pole position and start on the cleaner side of the grid as it is pretty dusty here at Zandvoort. The degradation on the rear tyres meant that they were going off frequently. It’s going to be a tough race tomorrow. As it was an interrupted qualifying session, with drivers going off and two red flags, it will feel like a long 30-minute race tomorrow. But, overall, I am pleased to be on the front row. Zandvoort is a great track, but it’s going to be difficult to overtake tomorrow. Hopefully, I can edge in front of Emma [Kimiläinen] and keep myself in front.”

Jamie Chadwick, 23, UK, Veloce Racing, said:
“I am really frustrated because I felt the pace was there and it is more mistakes on my side. The second red flag didn’t help because I didn’t manage to get a lap in at the peak of the tyre, but it was just a couple of silly errors in the last sector. I think pole position was there for the taking. Tomorrow I need to get a good start, which is important, as I have two people close to me in the championship in front of me and I still need to score points. The track is tough, but it is a great track to be racing at and I really enjoyed it.”

Qualifying results from round six of the 2021 W Series season are below. For full W Series results and session timings from Circuit Zandvoort visit https://wseries.com/races/zandvoort-round-6/.

British fans can watch the sixth round of the 2021 W Series season live from Circuit Zandvoort on Channel 4 from 15.00 BST on Saturday 4 September. The action can also be seen across W Series’ digital and social channels, as well as being broadcast in more than 175 territories with a full list available at https://wseries.com/where-to-watch/.