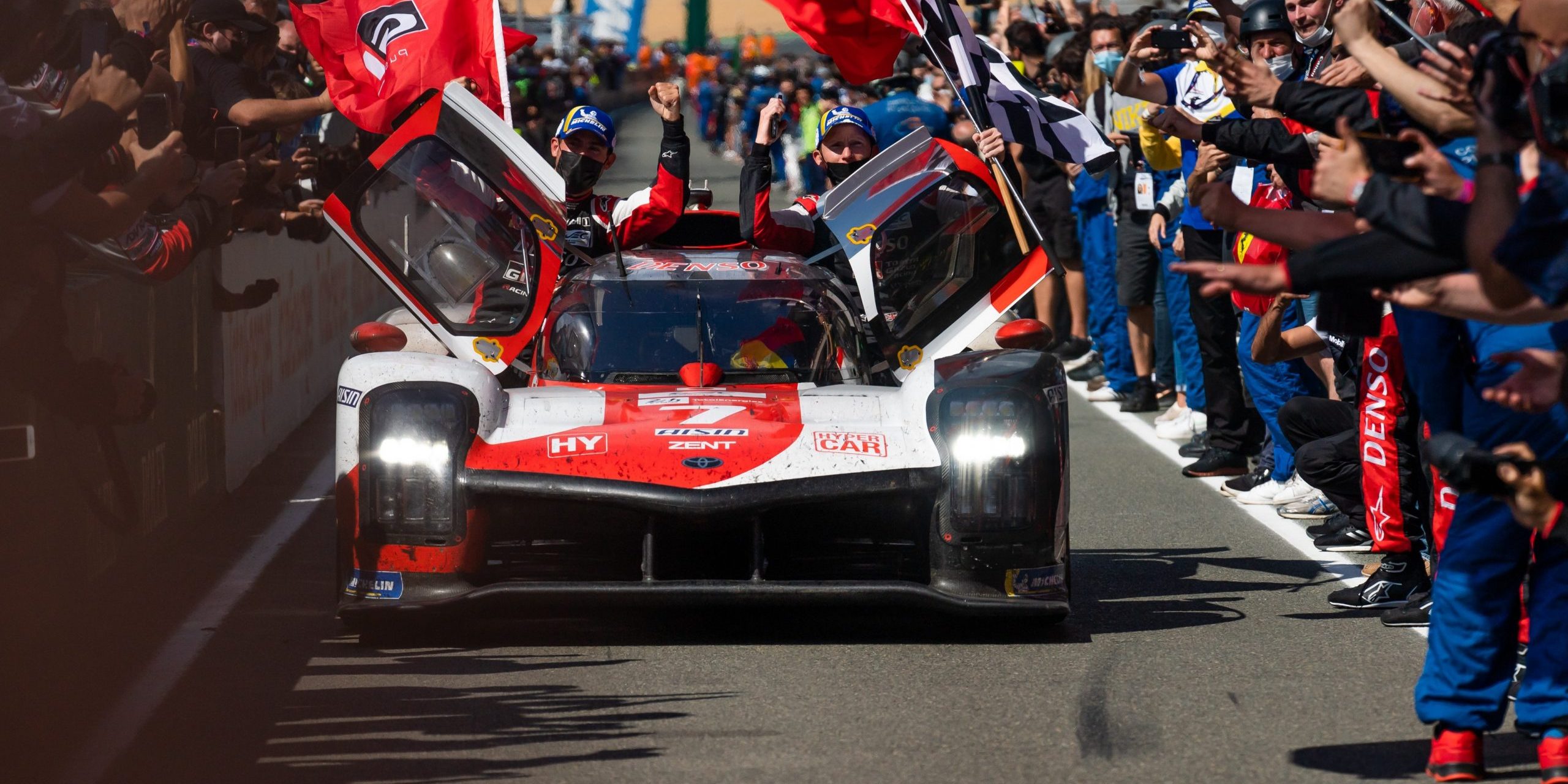 Round four of the FIA WEC, the 24 Hours of Le Mans, saw Toyota Gazoo Racing claim first and second overall in the Hypercar category, extending the team’s lead in the World Championship standings with two rounds remaining.

The No. 7 Toyota GR010 Hybrid Hypercar driven by Mike Conway, Kamui Kobayashi and Jose Maria Lopez ended their streak of misfortune at Le Mans to take their first victory at the legendary 24 hour race which this year saw the return of a limited number of fans.

The Hypercar eventually finished two laps ahead of the sister No. 8 car with Brendon Hartley, Kazuki Nakajima and Sebastien Buemi sharing the wheel. The No. 7’s win today marks only the second time ever that an Argentine (Jose Maria Lopez) has won Le Mans and is the team’s seventh consecutive WEC race victory in a row.

Despite Toyota’s one-two result, it wasn’t always plain sailing for the Japanese squad.  Indeed, the very first lap was drama-packed for the No. 8 crew as Olivier Pla in the No. 708 Glickenhaus entry made contact with Sebastien Buemi forcing the Swiss driver to stop for a system reset and down the leaderboard.  Both Toyotas also suffered time loss with refuelling issues later in the race, but the team worked through the problem eventually taking the win.

WEC debutants Glickenhaus Racing claimed fourth and fifth overall in its pair of Glickenhaus 007 Hypercars – the No. 708 and No. 709 sister cars successfully keeping out of trouble to make it to the finish in a bid to realise owner Jim Glickenhaus’ childhood dream of competing at Le Mans.

In the overall Hypercar championship standings, Toyota has now extended its lead over Alpine by 51 points.

There was double delight for the AF Corse Ferrari team as they took victories in both LMGTE classes at the 89th running of the 24 Hours of Le Mans today.

The No.51 AF Corse Ferrari 488 GTE Evo took a famous win as James Calado, Alessandro Pier Guidi and Come Ledogar combined to complete a dominant victory after leading for vast majority of race

For Calado and Pier Guidi it was a chance to celebrate a second victory in three years, while Ledogar took his first ever class win at Le Mans.

The No.51 trio managed to stretch a gap away from the No.63 Corvette Racing Chevrolet Corvette C8.R driven by Antonio Garcia, Jordan Taylor and Nicky Catsburg which led in stages during off-set strategy pit stops.

The Corvette appeared to have better pace in the cooler night-time conditions but the Ferrari came to the fore in the morning as Calado especially was able to open up a gap after several impressive stints.

The triumph for AF Corse ensured the Italian team celebrated its fourth LMGTE Pro win at Le Mans after successes in 2012, 2014 and 2019.

They fought back from a chassis damaging accident in qualifying and an early off-track excursion to stay in touch in second position in the world championship standings behind new leaders Calado and Pier Guidi.

In the LMGTE Am category, AF Corse took its first category victory at Le Mans as the No.83 team of Francois Perrodo, Nicklas Nielsen and Alessio Rovera claimed a third WEC victory of the season.

The trio picked up the lead on Saturday evening and managed to create a race winning gap to the TF Sport Aston Martin to seal a superb victory.

It ensured that Perrodo and Nielsen became Le Mans champions as well as reigning FIA WEC champions after completing faultless stints throughout the day and night. They also stretched their 2021 FIA WEC points lead as they attempt to go for back-to-back titles.

Rovera himself took a debut win after competing almost exclusively in Italian GT racing over the last few seasons.

TF Sport were just unable to get on terms with the AF Corse Ferrari but were ultimately compromised by a double puncture which occurred late on Saturday evening.

This caused Felipe Fraga to hit the tyrewall at the first Mulsanne chicane. But excellent work by the TF Sport team ensured only minimal time was lost in the actual pit-stop itself.

Rounding out the podium was the No.80 Iron Lynx Ferrari 488 GTE Evo crewed by Matteo Cressoni, Rino Mastronardi and Callum Ilott.

Iron Lynx enjoyed a successful weekend at only its second appearance at Le Mans as the No.60 car driven by Paolo Ruberti, Raffaele Giammaria and Claudio Schiavone took fourth position to move significantly up the points standings table.

Bittersweet victory for WRT in LMP2

The story of the race was undoubtedly in the LMP2 category where Team WRT suffered a bittersweet victory.

The Belgian squad was on course for a hugely impressive 1-2 on their LMP2 debut as Louis Deletraz, Robert Kubica and Ye Yifei in No.41 were leading home sister No.31 car of Robin Frijns, Ferdinand Habsburg and Charles Milesi  However, Yifei Ye stopped on the final lap leaving Frijns to take over the lead in the No.31 Oreca.

More action was to follow, however, as Frijns was forced to defend from the charging No.28 JOTA car belonging to Stoffel Vandoorne, Tom Blomqvist and Sean Gelael directly behind. The two were separated by just 0.7s as the chequered flag was waved with Blomqvist poised to swoop for the win but eventually settled for second.

United Autosports completed a strong recovery drive as the No. 23 car driven by British trio Paul di Resta, Alex Lynn and Wayne Boyd fought back from their accident on late Saturday evening to take fourth – one spot ahead of Panis Racing who claimed the third podium spot.

A solid performance from Inter Europol Competition sees the Polish team represented by Jakub Smiechowski, Renger Van der Zande and Alex Brundle round out the top five. The team enjoyed a close battle with United Autosports in the race’s closing stages with Brundle eventually losing a position to Di Resta.

The Pro-Am honours fell to DragonSpeed USA with its trio of drivers Juan Pablo Montoya, Henrik Hedman and Ben Hanley making a superb fightback from a heavy accident in Free Practice to finish tenth in class and on top out of the eight Pro/Am teams entered.

Elsewhere, there was heartache for the No. 22 United Autosports USA entry which was brought into the pits mid-race following an alternator issue which then led to a lengthy stint in the pits, dropping the team to the back of the class.

It was also a difficult race for the all-female No. 1 Richard Mille Racing Team crew when G-Drive Racing collided with Sophia Floersch on approach to the Porsche Curves.  The incident then caused the No. 1 car to be struck on track by the Racing Team India Eurasia car, eventually forcing the team to retire.

The No. 38 JOTA car also had a difficult race, the Oreca driven by Antonio Felix Da Costa, Anthony Davidson and Roberto Gonzalez was leading the class until Davidson went off the track when rain hit the circuit early in the evening.

Following today’s race, JOTA have now been catapulted to the top of the overall LMP2 standings but they are just one point ahead of WRT in second place. Third is the second JOTA car, seven points adrift of Team WRT. The No. 22 United Autosports USA entry is now fourth in the points.