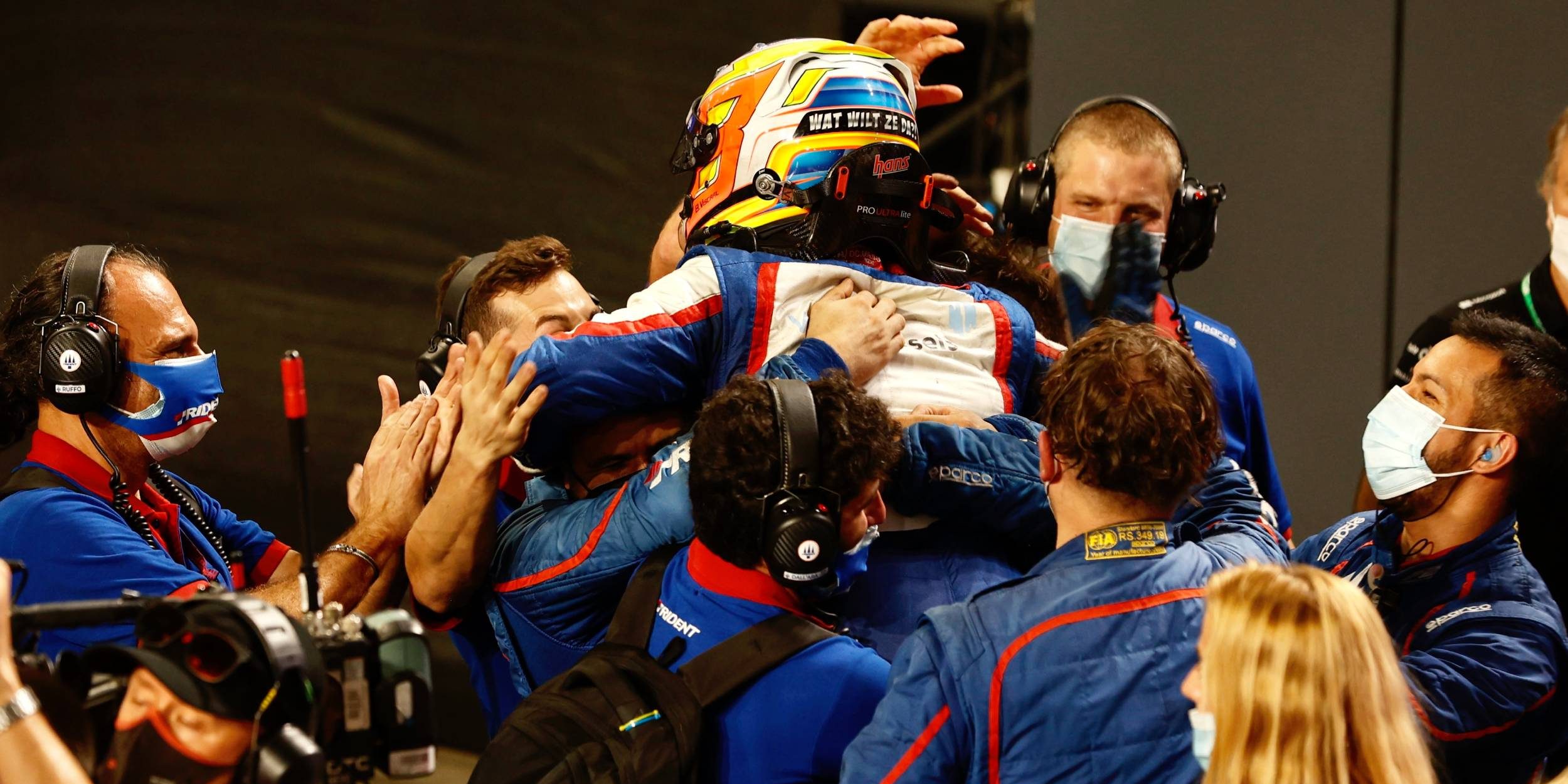 After a very exciting second sprint race at the Jeddah Corniche Street Circuit, Bent Viscaal secured his second podium finish of the 2021 Formula 2 season. The 22-year-old driver of the Trident Racing team drove from the second starting position on the street circuit in Saudi Arabia to a second place at the finish line.

“That was a pretty challenging race!”

During the first sprint race on the Arabian asphalt ribbon Viscaal had fought his way to the front. After a somewhat disappointing qualifying session, the young Dutchman started from the fourteenth position, where he passed four opponents in the race. At the end of the first test, one of the drivers who finished ahead of Viscaal received a time penalty, which promoted the Tukker to ninth position.

Because of the rule with the reversed starting grid, where the top ten of the first sprint race may start the second sprint race in reverse order, it seemed at first that Viscaal could start from pole position at the second company. However, promotion to position nine meant that the Trident driver had to start second at the second showdown.

At the start, Viscaal immediately made an attack on frontrunner Daruvala, with the Indian driver pushing the Dutch talent over the kerbs on the exit lane. Thanks to this action, Daruvala retained the lead and, to make matters worse, Piastri and Lundgaard were able to work their way past Viscaal.

In the extremely hot Jeddah, the Tukker kept his cool and after two long safety car periods he went into battle with Lundgaard and the Shwartzman who was coming up behind. More than once the three drivers were in contention with each other. In the end, Viscaal’s racing prowess proved decisive: the Dutchman allowed Lundgaard to dig a hole for himself, causing the upcoming IndyCar driver to run into a time penalty.

Because Daruvala, who had already lost his leading position to championship leader Piastri, was also penalized by the race committee, Viscaal’s fourth position was converted into a stunning second place. The 22-year-old made it to the podium for the second time this season and treated his employer Trident Racing to another boost.

The team, which in the past two seasons (2019 and 2020) combined scored only 29 points and had not secured a position on the honorary scaffold for no less than five years before Viscaal’s first podium finish, has now definitely found its way back to the front. Thanks to the twelve points that Viscaal scored tonight, his counter for this season now stands at 34. This puts the young Dutchman in 14th place in the intermediate standings.

“That was a pretty challenging race!”, Viscaal looked back on the encounter in Jeddah shortly after the second sprint race. “I am extremely happy with this second place. Beforehand, I said that a podium place should be possible, but you have to prove that first. Trident has come a long way and every employee in the team has a share in this success. I am very happy with the steps we have taken during this season. It wasn’t always easy, but since the summer break things have been coming our way.”

“The race started with an incident. Daruvala made himself quite wide, causing me to go off track and lose two places. I think mine about that action, but don’t want to dwell on it too long. The battles with Lundgaard and Shwartzman were solid and I had to work hard. In the end, that resulted in this great podium finish. During the first sprint race the car still didn’t feel ideal, so we made some changes during the interval. These worked perfectly during the second race.”

“In the main race on Sunday afternoon we will start from fourteenth place, which of course makes repeating this performance quite difficult. Nevertheless, I think we have good chances of achieving a good result tomorrow as well. Top ten is certainly possible, but keeping the car in one piece is the most important thing here. I’m going to bed with a good feeling tonight and I intend to put on another good show tomorrow.”

The Formula 2 weekend in Saudi Arabia concludes with the main race. This race starts around 15.25 Dutch time.