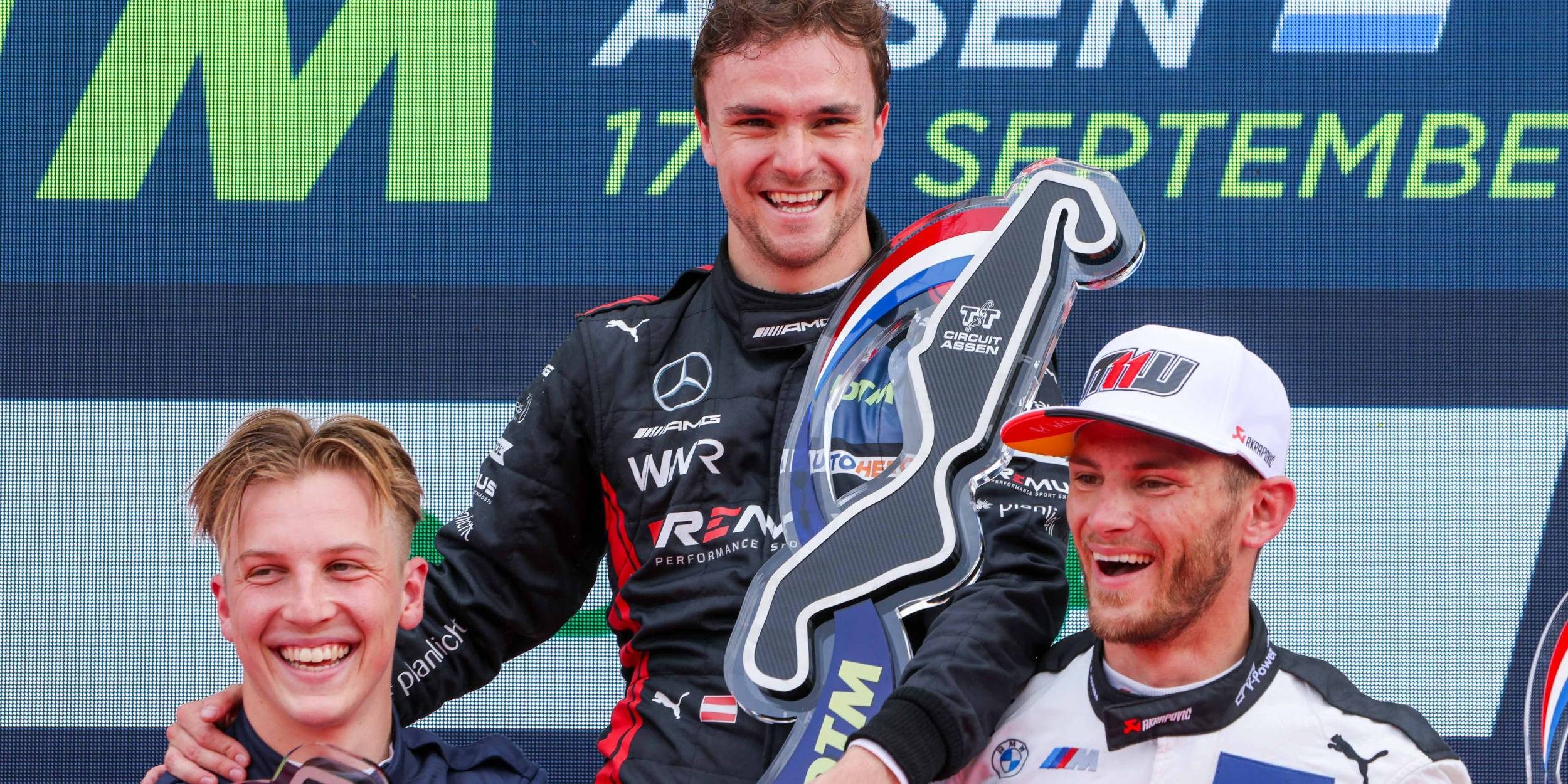 Excitement in DTM is rising to the maximum prior to the big double finale at Hockenheim (1-3 October) and Norisring (8-10 October): while Austrian Lucas Auer scored his first win of the season with the WINWARD Mercedes at Assen in The Netherlands, Liam Lawson is heading home for the first time as the DTM points’ leader. The only 19 years old New Zealander, who had taken over the points’ lead from Kelvin van der Linde with a third-place finish in his Red Bull Ferrari on Saturday, extended his lead in the drivers’ standings by finishing second from Saturday race winner Marco Wittmann with the Walkenhorst BMW.

“During the DTM Talk at the IAA in Munich last week, I said that it was about time for me to win a race again.”

With a margin of ten points from Wittmann (165), Liam Lawson (175) is heading to Hockenheim. Kelvin van der Linde (160) and Maximilian Götz (155) are also among the favourites in the battle for the coveted 2021 DTM title. The decision, however, will probably only come at the just 2.3 kilometres long street circuit in Nuremberg where the finale will be held for the first time in DTM history.

“During the DTM Talk at the IAA in Munich last week, I said that it was about time for me to win a race again. Perhaps, I should be saying things like that more often! It was a near perfect day with pole position and victory, both of which I mainly owe to my team. After the damage from Saturday, they had to work for a long time and gave me a perfect car,” the buoyant 27 years old Auer said. Liam Lawson, meanwhile, reported about an intense race: “I was in the zone for around 90 percent, this was all I had. Towards the end, I still tried to close up to Lucas Auer, but he was simply too fast. Nevertheless, I am really happy with the outcome of this weekend. Being the leader in the championship is just great.” Marco Wittmann was quite happy, too: “I feel sorry for Daniel Juncadella who retired just before the end with what probably was a puncture. Still, I am happy to take this podium and especially the points. I had to fight really hard for it, first with the Ferraris and then with Kelvin van der Linde, who was making life really difficult for me with much fresher tyres.”

In the press conference, Auer, Lawson and Wittmann spoke about their impressions during the final laps in which they clearly noticed the great atmosphere in the grandstands while driving. Both on Saturday and on Sunday, DTM excited the crowds, particularly in the main grandstand, the longest in Europe with a length of 1.1 kilometres, with a pair of first-class races. Be it during the pit walkabout or the starting grid: the excited atmosphere sparked memories of pre-Covid 19 days. Fans and drivers highly enjoyed the atmosphere in equal manner. Emotional feelings in DTM.

In contrast to Saturday, when several collisions happened at the start, the 21 drivers made a perfect start and staged a clean opening lap on Sunday. Auer immediately pulled a slight gap from his rivals while Wittmann had to defend his position against the Ferrari duo. On the fifth lap already, a large part of the field came into the pits for an early mandatory tyre change, including Auer as the race leader. Almost all the others came in for fresh Michelin tyres in the following two laps. Like on Saturday, ABT Sportsline opted for a late stop for Kelvin van der Linde and Mike Rockenfeller. The South African came in after lap 20 and initially rejoined the race in sixth place. Rockenfeller only came in for fresh tyres after lap 33, clearing the way for Auer and the others. Entertaining overtaking manoeuvres and wheel-to-wheel duels weren’t limited to the front of the field, providing great entertainment for the fans. Only Juncadella had bad luck, his car ground to a halt with one lap remaining, losing his podium slot.

In qualifying on Sunday morning, Lucas Auer surprised by claiming pole position. After Sophia Flörsch (GER, Audi, Team ABT), who had scored her first DTM championship points, had caused an interruption with the red flag by an excursion into the gravel bed, the world class DTM drivers sparked fireworks of fast lap times in the remaining three minutes. For Auer, it was the first pole position since October 2018 and the tenth pole of his DTM career. Wittmann secured second place on the front row of the grid alongside Auer, Red Bull duo Liam Lawson and Alex Albon shared positions on the second row.