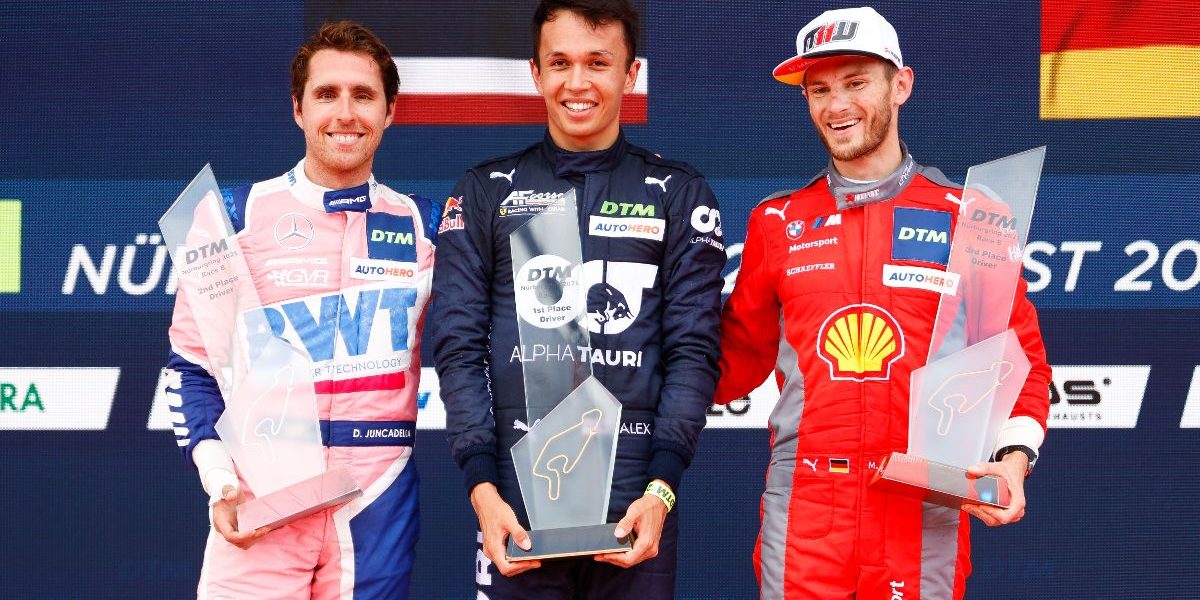 Alex Albon scored his maiden victory in DTM at the Nürburgring, the second win for Ferrari in history of the series. In an action-packed race, the Thai driver, who had started from pole position, stayed away from all the incidents and won in dominant fashion. Red Bull’s replacement Formula 1 driver is the sixth winner from eight DTM races held so far this season. In dry, good weather conditions, Spaniard Daniel Juncadella with the Mercedes-AMG of the GruppeM team and two-time DTM champion Marco Wittmann with the Walkenhorst Motorsport BMW rounded out the podium.

“Today, that was a really good day for my team and for myself”

After eight of 16 races, Kelvin van der Linde of the ABT Sportsline Audi team is the unofficial ‘half-time champion’ of the 2021 DTM, although, on Sunday, the South African failed to score points for the first time this year after a collision with Liam Lawson and Mike Rockenfeller in the chicane. With 129 points, Kelvin van der Linde is starting the second half of the season as the leader in the drivers’ standings. His margin over Maximilian Götz (96) decreased to 33 points. Third in the standings is now Wittmann (94), Albon (82) has moved up to fourth place.

Porsche, meanwhile, had bad luck during its DTM début. Like on Saturday, Michael Ammermüller didn’t make it to the finish with the 911 run by SSR Performance, but had clearly shown the potential with fourth place on the starting grid. 19-year-old Belgian Esteban Muth scored the best result of the season for Lamborghini so far with fifth place. Ex-Formula 1 driver Timo Glock finally scored his first championship points of the season with the ROWE Racing BMW.

“Today, that was a really good day for my team and for myself,” Albon said after becoming the first DTM race winner from Thailand. “The team has been working hard overnight and that paid off. Today, we have made a step forward, we want to carry over this momentum.” The Red Bull Ferrari combination by AF Corse is the first team to have won races with both its drivers, Albon and Lawson, this year.

Action-packed race: “Never seen before in DTM: five cars abreast at times”
Like on Saturday, the specators in the grandstands got to see breath-taking moments during the start in close double-file formation, repeated twice after safety car interventions. From first place on the grid, Alex Albon charged into the lead with the AlphaTauri Ferrari and led the DTM field, for the first time with 23 cars, from Daniel Juncadella (ESP/GruppeM-Mercedes-AMG) and Michael Ammermüller (GER/SSR Performance) with Porsche. On the opening lap, however, the first incident followed as Swiss Philip Ellis slid through the gravel trap and then spread several carbon parts across the track. After Maximilian Buhk was hit and ended up in the pit wall, after which the safety car was deployed for the first time.

As first restart followed after lap three, Albon again pulled away. In the second corner, the next turmoil followed with Ammermüller, Luca Stolz with the Toksport Mercedes-AMG, Ellis and Götz. After the first pit stops, guest driver Hubert Haupt, who made his comeback after his DTM campaigns in 1991/1992 and 2001, saw the Mercedes-AMG of his HRT team grounded to a halt with technical failure, the safety car came out once again. At that time, it was clear that all those who hadn’t made their mandatory pit stop yet, were at a disadvantage, a total of eight drivers.

Liam Lawson triggered the next incident, making an optimistic manoeuvre in the chicane, but to no avail. As a result, none other but the two ABT Audis of Kelvin van der Linde and Mike Rockenfeller retired, Lawson incurred a drive-through penalty. Having arrived as runner-up in the points’ standings, 19-year-old Red Bull junior driver Lawson left the Nürburgring empty-handed.

Surprisingly, ex-Formula 1 driver Christian Klien (AUT/JP Motorsport) was in the lead after the second safety car intervention and racked up the first miles in the lead for McLaren. Albon, however, closed up soon and claimed back the race lead in a dominant way with Juncadella and Wittmann in tow.

“That was really extreme at times today. Partly, we were racing with up to five cars abreast, that was heavy. I have never experienced something like that in DTM before, but nevertheless, it was great fun,” Wittmann reported. “In moments like that, it is always important to make the right judgement between taking risk and being cautious. Today, we managed that quite well.”

Dramatic qualifying: four brands on the first two grid rows
Like on Saturday already, when 22 cars achieved lap times within one second, qualifying on Sunday morning delivered exciting position fights as well. Light rain added to the excitement, also leading to various spectacular spins, but without any consequential damage. Positions changed frequently, every prediction was in vain. Although the rain intensified, the lap times improved towards the end. Eventually, it was the AF Corse Ferrari team that was able to celebrate: Alex Albon (THA), Red Bull Formula 1 replacement driver, secured the first-ever DTM pole position for the brand with the prancing horse from Maranello. Next up were Mercedes-AMG with Spaniard Daniel Jancadella (GruppeM), BMW with Zolder-winner Marco Wittmann (GER/Walkenhorst) and Porsche mit Michael Ammermüller (GER/SSR Performance). As a result, four brands were represented on the first two grid rows. In the 23-strong field, all the seven brands present ranked among the first ten. In qualifying and in the races alike, the 2021 DTM shows an extraordinary balanced competition.

DTM action continues in a fortnight with the next round at the Red Bull Ring in Austria from 3-5 September.