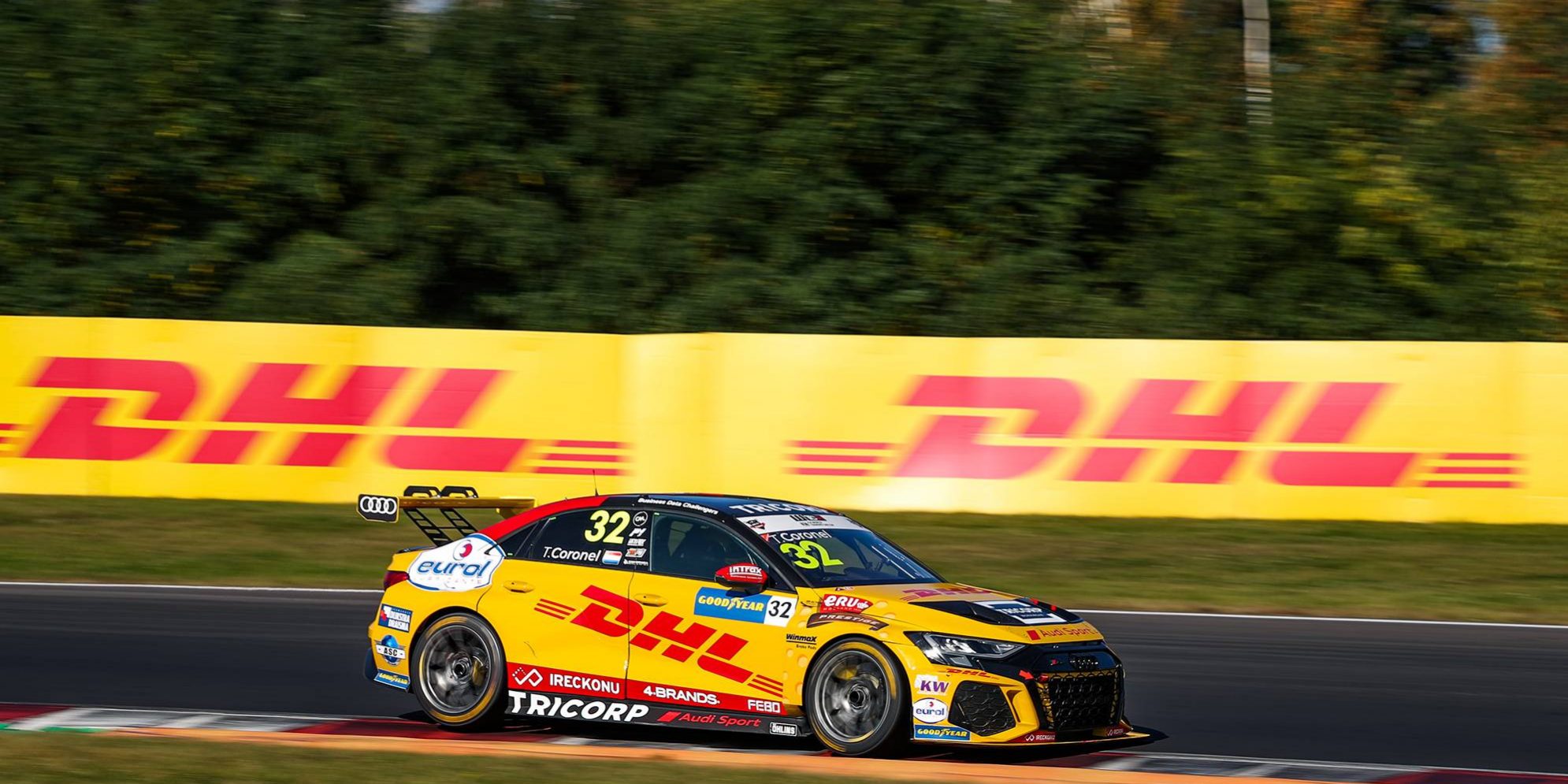 Due to an adjustment of the calendar of the FIA WTCR – World Touring Car Cup, the newly added WTCR event at the Automotodrom Most in the Czech Republic now coincided with the final of the TCR Europe Series, which had long been scheduled at the Circuit de Barcelona-Catalunya in the Spanish Montmeló. For Tom Coronel, who participates in both championships, this caused a logistical problem, but eventually he was able to drive three of the four races through some back and forth travel. The two WTCR races yielded two tenth places with the new Audi RS 3 LMS in DHL livery, driven by the Comtoyou DHL Team Audi Sport. In the first race of the TCR Europe Series, in which Coronel drove the previous generation of the Audi, he finished 14th, on which he concluded the championship in fourth place.

“I was able to pass nicely, even grabbed Tarquini because there was so little grip”

On Friday, the weekend began with the qualifying of the FIA WTCR in Most. Coronel: “In the first outing, I was already on a good run with the fifth time. In the second outing with new tires, I was on my way to a considerably faster time, but then in turn 13, a very fast right-hand turn, I had mega oversteer. I only lost two tenths, so I could have kept going, but I thought, ‘I’ll wait until the third outing’. I went into the pits for new tires, but with that I braked on my first lap. With that, I just ruined it. I should have been there 100 percent, because with my first run I missed the top twelve by just 0.04 seconds. Fourth, fifth or sixth place would have been nice. But yeah, so that doesn’t count.”

Coronel then drove with his team boss, his chief mechanic and the cameraman to Prague, from where the quartet flew to Barcelona in the evening for the TCR Europe Series. “There we arrived at the hotel at half past one,” Coronel told us. “On Saturday morning we went to the track, there I did the set-up of the car. Then qualifying. I made a small mistake, the rear wing was still at the position of Monza: -2 degrees, and the race we drove with +4, so too much oversteer and therefore I missed the top twelve by a tenth of a second, just barely. I am sick to death of it! In the race I started well, but in the first lap I was rammed off the track by Jelmini, who came at me from 50 meters. He was even behind two others, he totally braked! In the end I drove through the field, picked up three or four places and also overtook Girolami, who is still fighting for second place in the championship. So I ended up 14th. I had a good race, but it’s a pity that the result wasn’t there.” In the final standings of the TCR Europe Series, Coronel occupies fourth place of the total 26 drivers who managed to score points during the season.

On Saturday evening, the party flew back to Berlin, followed by another three-hour car ride to Most. “In the end I was back in bed by 1:30,” said Coronel. “On Sunday morning back to the circuit, drove the DHL VIP laps with the guests from DHL, also the riders who had won the world long-distance racing championship for Superbikes the day before in Most, that was quite special.” In the first race, Coronel started from 13th place. “A pretty good start,” he commented. “I was able to pass nicely, even grabbed Tarquini because there was so little grip. Overtaking was difficult. I had a fight with Huff, who tapped me, and so I ended up tenth.”

In the second race, there was plenty of action, the driver told us, “Mega crashes everywhere, left and right in the field, a lot happened. I myself just drove a solid race, I had a good ‘pace’, was on the bumper of the drivers who finished seventh, eighth and ninth. We didn’t quite have the speed to get further forward, so that’s how I ended up tenth again. All the Audi’s had some lack of grip, we need to analyze that properly, and then move on next week already.” Next week, from October 15 to 17, the sixth race weekend of the FIA WTCR is on the program, held at the Pau-Arnos circuit in southwestern France. “Just like Most, that is also a circuit that I have not been to before, so I am looking forward to that as well,” Coronel said.