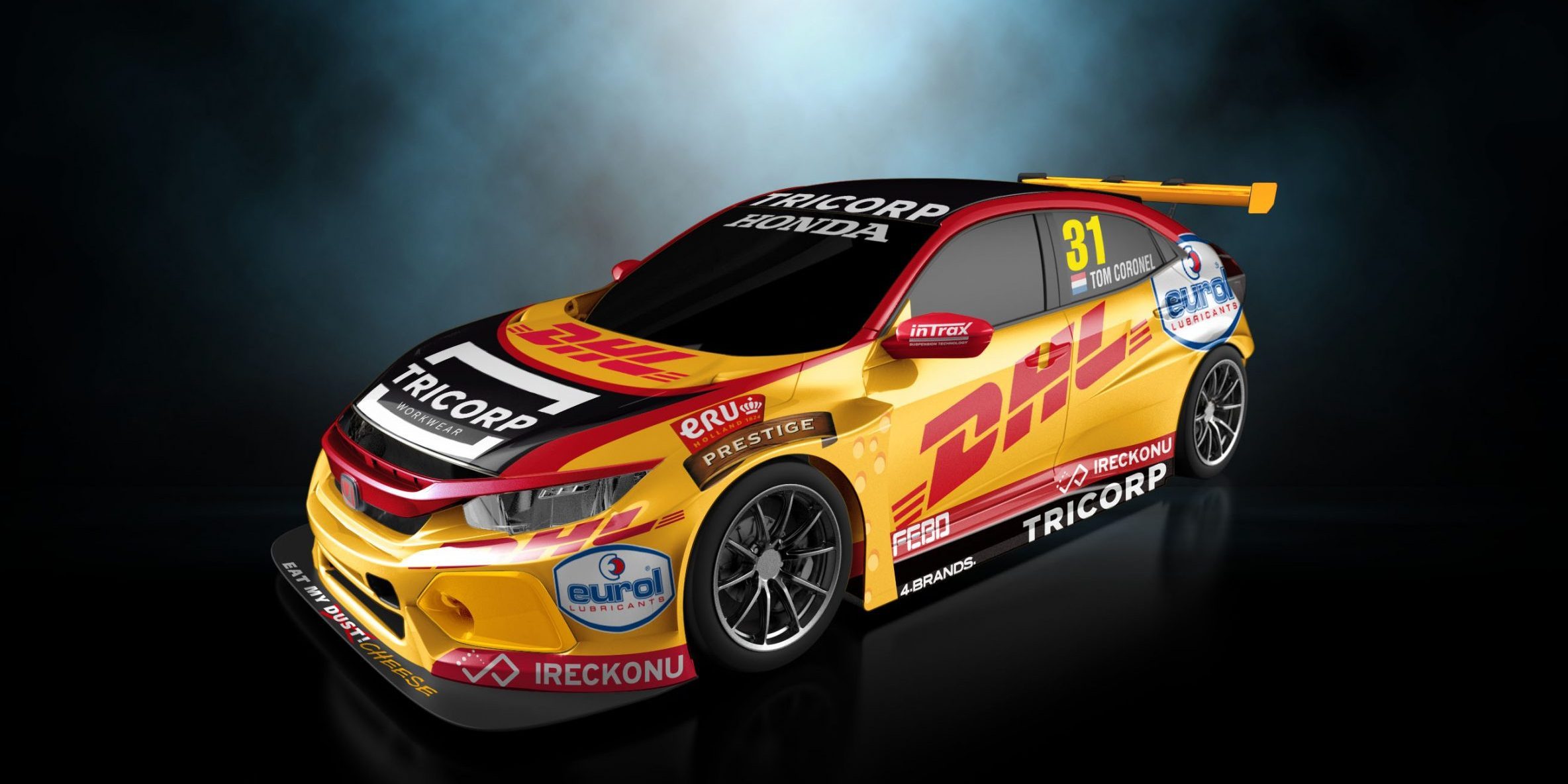 After a long forced break, the TCR Europe Touring Car Series season will start next weekend at Circuit Paul Ricard, Le Castellet in the south of France. Driver Tom Coronel provides the Dutch input in the highly regarded touring car competition, because just like last year he will participate in the series with a Honda Civic Type R TCR, used by the renowned Belgian team Boutsen Ginion Racing. The car is finished in the well-known yellow and red livery from partner DHL. “I look forward to being able to race again and to continue the good cooperation with Boutsen Ginion Racing and Honda for many years now” says Coronel.

With 24 drivers from eleven countries and cars from five different brands in the field, there is also plenty of variation in the TCR Europe this year. “Close fighting is assured! In addition, there are riders at the start that I have known for years from other series, for example the former WTCC or the WTCR. Pepe Oriola, Mehdi Bennani, John Filippi: all guys that I have been competing against for years and that I now meet again on track”, says Coronel.

Coronel is happy that the forced break came to an end: “Fortunately, I have been able to race ‘in real life’ several times in the past period. Of course, the sim events in the most violent corona period were a great replacement. But for me, nothing beats real racing in a car with four wheels, a racing engine and on a real track against other drivers. Together with the Boutsen Ginion Racing team, I have spent a lot of time in the past period to make sure we are prepared optimal for the upcoming season. We have remained faithful to the Honda Civic Type R TCR, as in WTCR we will run it with number 31. It’s the only car in the team, so full focus is guaranteed.

Again, Coronel can count on the active support of its longstanding partners, led by DHL. “Especially in difficult times like now, it is good to know that such parties will remain my partners. In addition, we have even welcomed some new partners for this season. The color scheme remains familiar in yellow with red, ”said the driver.

Of course, the performances of Tom Coronel in the TCR competitions can also be followed via RTL7 as part of the WTRC-World Tom Coronel Racing TV show. Nine 40-minute broadcasts are planned, with plenty of focus on the TCR Europe Touring Car Series races with the Honda Civic. Those broadcasts are also repeated, bringing the total to 18 broadcasts. The races can also be seen live on YouTube and Tom Coronel’s various social media channels.

For Coronel, participation in the FIA WTCR was already established at an earlier stage, which has repercussions on the racing program in the European competition. “I can ride three events in TCR Europe: next weekend at Circuit Paul Ricard, then on October 24th at Circuit Spa-Francorchamps and on November 8th the final in Jarama in Spain,” said Coronel. “The other three events on the calendar coincide with the FIA WTCR races and that schedule has been fixed for me before, but I’m happy to be able to drive these races at least! Given the corona situation, we as a team must of course meet all kinds of extra conditions, including mouth masks. That also applied to the races that have been driven in the past period and you get used to it. In short, good that it all starts again. I can not wait!”