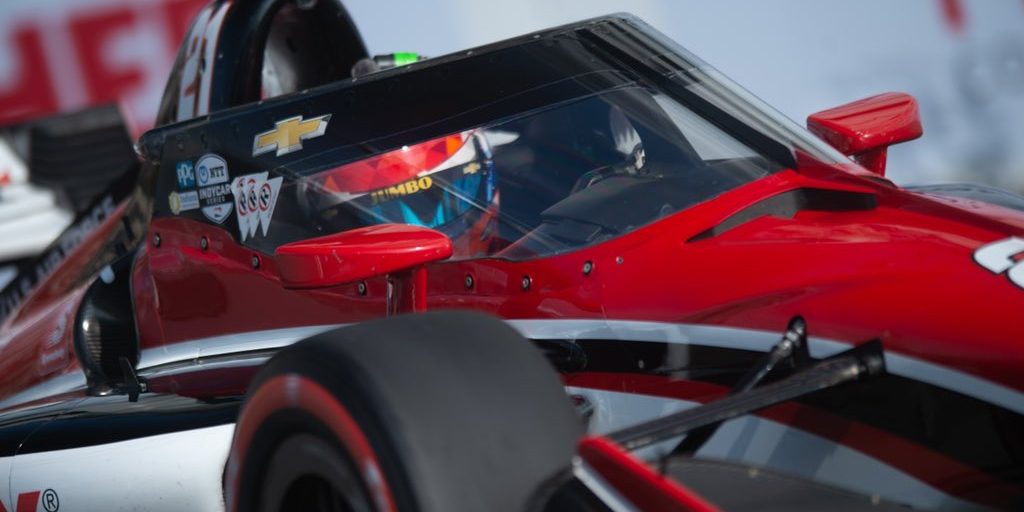 The Acura Grand Prix of Long Beach, and with it the NTT INDYCAR Series season of 2021, has ended in disappointment for Rinus ‘VeeKay’ van Kalmthout. An impressive overtaking march, which was started by the 21-year-old Dutchman, was ended prematurely due to mechanical failure.

After a difficult qualifying session, VeeKay, who earlier today (Sunday) proudly announced that he will race for the Ed Carpenter Racing team in 2022, had to start from the twenty-fourth position on the grid. Starting on the hard compound Firestone tire, VeeKay showed what he’s made of on the Long Beach Street Circuit, where he had never raced before this weekend. On the famous asphalt ribbon along Shoreline Drive, the youngster found his way to the front in no time.

Thanks to some tight overtaking and a well thought out pit stop strategy, VeeKay found his #21 SONAX Chevrolet back in a respectable tenth place after thirty-five of the planned eighty-five laps. Just when the Fort Lauderdale, Florida native was looking to make an overtaking attempt relative to the ninth position, the fuel pressure in his car dropped.

Where VeeKay had so carefully worked his way to the front, there he lost all the captured positions within a few laps. Shortly after the halfway point, the Ed Carpenter Racing team decided to call the Dutchman in to examine the red and black car bearing start number 21. Engine suppliers Chevrolet went to VeeKay’s car en masse, but could not prevent the talented twenty-something from losing several laps.

The NTT INDYCAR Series season of 2021, which started so formidably for VeeKay with six top-ten finishes in the first seven races – including his first victory at Indianapolis Motor Speedway and a podium finish at Belle Isle Street Circuit – thus ends on a low note. After the collarbone fracture, suffered in June after a bike accident, a poisonous cup was poured out, which was still not empty in Long Beach. Several times VeeKay could compete with the front runners in terms of lap times, but a satisfactory result was not achieved.

“Bummer. It’s against us,” VeeKay let us know from the west coast of the United States. “I climbed from twenty-fourth place to P10 and was strategically sitting very well, when the fuel supply started to falter. In high revs the car didn’t pull through and I couldn’t even reach the top gear anymore. This is a great pity, because I was on course for a top-five classification. In terms of strategy, we had an edge over many of our competitors and I was able to save fuel at my leisure until the problem occurred.”

“I am satisfied with my own performance. In thirty laps I made up fourteen places. I was in good spirits, it went top notch today – better than it has in recent months. When the strategy also came our way, I thought we would finally have some luck. But it was unfortunately not to be.”

“The 2021 season was a big rollercoaster. It started out promising, great even. Everything was in place and I could show what I’m worth. My first win, the podium finish in Detroit and the top week around the Indianapolis 500 were the highlights. After the weekend in Detroit, things fell apart. We definitely had good races after that, but we missed out every time – every time because of different circumstances.”

“In the end, we learn from this. Next year I will return, for the third season with Ed Carpenter Racing. We have a long winter break where we can make big steps. Next year, I want to continue the line that we were able to put in during the first half of the 2021 season, along with ECR throughout the year. For now, I want to congratulate IndyCar champion Àlex Palou. He has done incredibly well this year and is the rightful title holder. He is to be congratulated, I am happy for Àlex. Next year I want to compete with him!”, VeeKay concludes combatively.

With a victory, a second place and a total of six top-ten finishes, VeeKay concludes the 2021 NTT INDYCAR Series season in twelfth place in the final rankings. The Dutchman collected 308 points this year.

VeeKay and Ed Carpenter Racing will have five months to prepare for the next NTT INDYCAR Series season. The first race is scheduled for February 27, 2022, kicking off as usual on the streets of St. Petersburg, Florida.