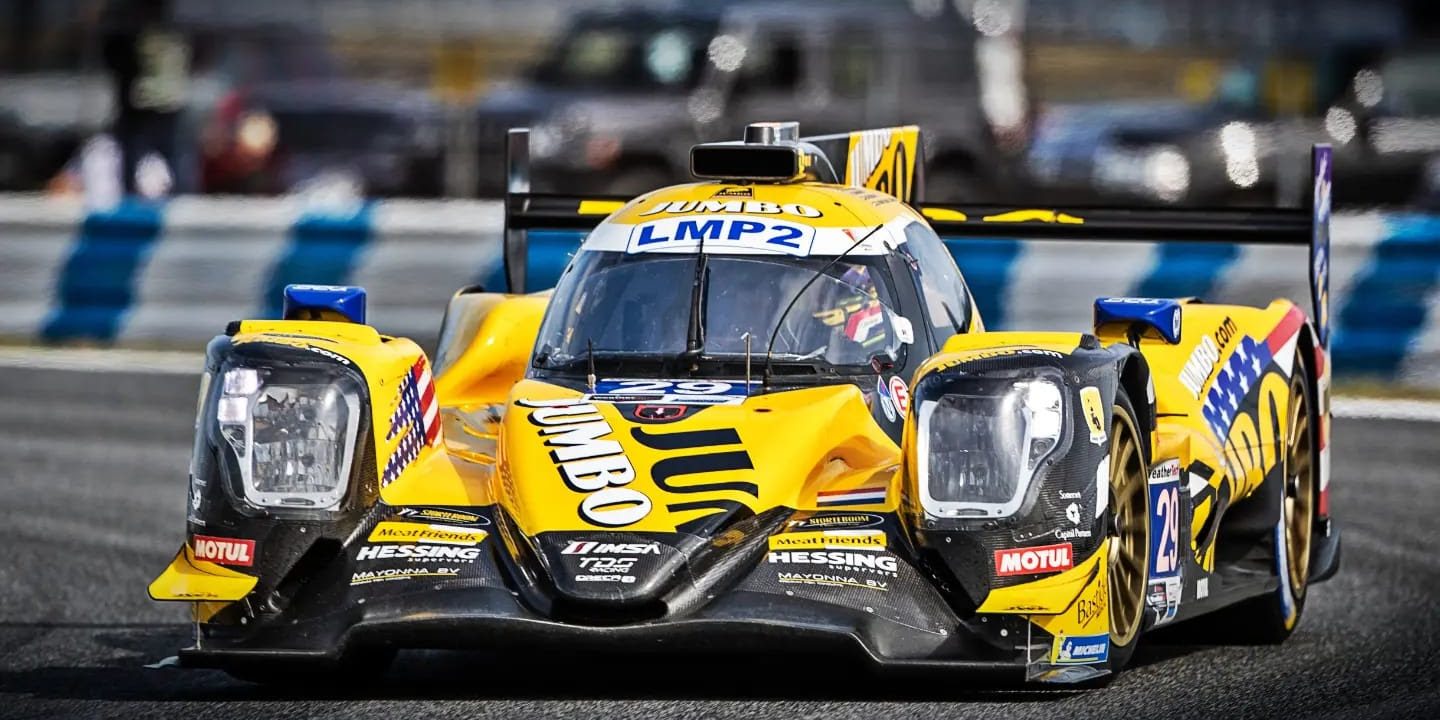 The 2022 motorsport season started in memorable fashion for Rinus ‘VeeKay’ van Kalmthout. The 21-year-old Dutchman drove, together with his three Racing Team Nederland colleagues, to a second place in the LMP2 category at the famous 24 Hours of Daytona.

For the second time in his motorsports career, VeeKay was registered for the Rolex 24, as the legendary endurance event in the United States is officially called. This time, however, the Dutchman actually appeared on the asphalt during the race. While a former colleague irreparably damaged the car VeeKay was supposed to drive in 2021 before the driver changes took place, the young Dutchman was able to race this year thanks to cautious but lightning fast teammates.

At Racing Team Netherlands, VeeKay was able to work with Giedo van der Garde and his personal sponsor Frits van Eerd, the owner of Jumbo supermarkets. Since four drivers are required to race an LMP2 car for 24 hours on the Daytona circuit, young American Dylan Murry was allowed to sit next to the Dutch trio.

“The Dutchman turned out to have the fastest average pace measured over fifty laps of all the competitors in the LMP2 class.”

The race start was performed by Van Eerd, who neatly kept the yellow-black Racing Team Nederland car out of trouble. Next, it was up to VeeKay to gain positions. The resident of Fort Lauderdale, Florida, drove from sixth place in the LMP2 class to the lead in no time. Throughout the long-distance race, this scenario would repeat itself several times: each time VeeKay was behind the wheel, the one-time IndyCar race winner proved himself a born endurance driver.

Race victory in the LMP2 class seemed within reach, thanks in part to VeeKay’s good performance. However, a broken coil threw a spanner in the works. Racing Team Nederland was two laps down after three quarters of the 24-hour race, putting three LMP2 competitors out of reach. Two late neutralizations and two unleashed Dutch drivers later, the team still found itself on the podium with a second place.

During VeeKay’s penultimate stint Racing Team Nederland, helped by the neutralizations, made up the two-lap gap. VeeKay tore past the Dragonspeed car of leader and IndyCar colleague Colton Herta in spectacular fashion. Teammate Van der Garde was then allowed to close the gap to the numbers two and three, whom he passed shortly before the end of the race. Only the Dragonspeed team proved to be just out of shooting distance.

VeeKay achieved a notable personal success in his first full endurance race. The Dutchman turned out to have the fastest average pace measured over fifty laps of all the competitors in the LMP2 class.

“I am extremely happy with this second place and thoroughly enjoyed this fantastic race,” said VeeKay a day after the 24 Hours of Daytona. “The cooperation with Racing Team Nederland, Giedo, Frits and Dylan was perfect. Of course we secretly regret that we narrowly missed out on victory in the LMP2 class, but we can look back on a strong race with satisfaction.”

“This was my first real endurance race, as I didn’t do a lap last year,” VeeKay reflected. “In the end, I spent thirty-three percent of the entire distance behind the wheel, which was eight hours and two minutes. In between, I tried to sleep, but it didn’t work out very well. I kept constantly looking at the live timing and scoring to see how we were doing! Beforehand, I was scheduled to drive four triple stints, which would give me a six-hour break between the first and second stint. During that time, I was able to close my eyes for a while. I had to get used to it when I got back in at midnight, but underneath it all actually went great.”

With 246 race laps to his name, VeeKay proved to be one of the most productive drivers in the entire race field. “Beforehand I was a bit worried about the race,” VeeKay acknowledges, “because you don’t know how the field compares with those slower GTs and the faster DPi cars. After one stint, all doubts were gone: I felt like a fish out of water, like I had never done anything else. This 24 Hours of Daytona is one of the most memorable races I’ve had the pleasure to drive so far and that’s partly thanks to the perfect atmosphere at Racing Team Netherlands. From fellow drivers to mechanics and engineers, everyone was extremely professional and committed. This ensured that everyone went all the way until the last second, which is why we eventually finished second.”

“The overtake on Colton was one of the highlights of my race, at that moment I really felt like flying”

VeeKay steals the show thanks to a daring overtaking move on IndyCar colleague Herta, who at that point has a lap lead on Racing Team Netherlands. The overtaking action turns out to be crucial afterwards: because VeeKay has eliminated the lap deficit, Racing Team Nederland will have the opportunity at a next neutralization to join the rear and thus get the LMP2 competitors in the direct field of sight again.

“The overtake on Colton was one of the highlights of my race, at that moment I really felt like flying. In addition, the first stint was very memorable because I entered sixth and returned first, and I found it very special to race at sunrise.”

“I want to thank Racing Team Netherlands, Giedo and Frits, and of course our American teammate Dylan, for this race. There was a great team feeling and we had an unforgettable week together. If I am asked again for a race like this and if my IndyCar calendar allows it again, I will not hesitate to accept it!”, concludes VeeKay enthusiastically.

For VeeKay, the 2022 racing season continues with a race on the streets of St. Petersburg, Florida. Next Sunday, February 27, the drivers of the NTT IndyCar Series will finally get to race again. Before that, VeeKay will complete another test day at the Sebring circuit, which will take place on February 14.