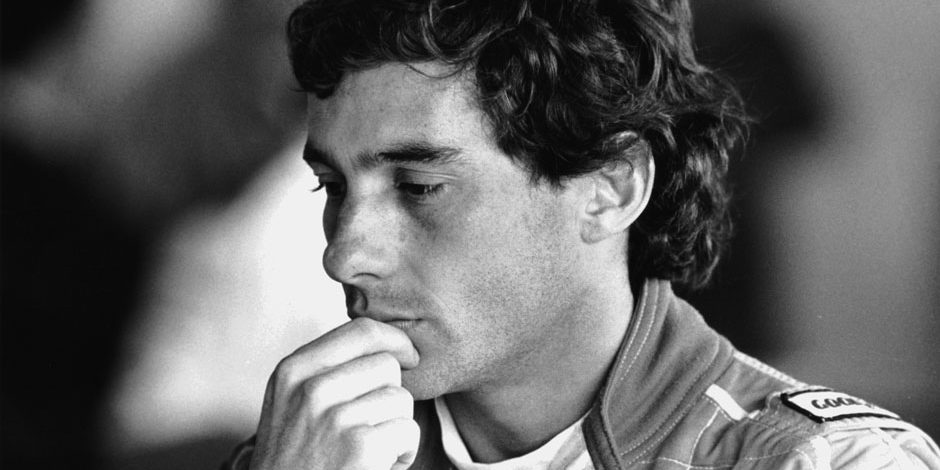 Ayrton Senna da Silva. Everyone who follows any kind of motorsports knows the name of this true legend. His name is more than just a driver who performed at the very top in his time. It has become a synonym for all racing drivers risking their lives on track. Though luckily the sport has become extremely safe nowadays, there is still an atmosphere of heroism and risk taking.

“I continuously go further and further learning about my own limitations, my body limitation, psychological limitations. It’s a way of life for me.”

With the dead of Ayrton Senna 25 years ago and Roland Ratzenberger in the same weekend, not only Brasil but the whole racing community experienced an extreme shock. Rubens Barrichello encountered a very dangerous accident that very same weekend, but was lucky enough to walk away. Everyone knew racing was dangerous, but it was becoming safer over time as safety measures like the monocoque and better helmets were introduced. The sport always had a shadow of danger and death over it, but everyone was getting more and more conscious of the responsibility the sport and drivers had to improve the safety. Not only for the drivers, but also for employees working in the sport like team crew members and track marshalls.

Back in the days there were the so called ‘purists’ who believed motor racing should be, and stay dangerous. It was part of the sport and the drivers chose to put their lives on the line didn’t they? They were paid large amounts of money and could live the jet set live normal people only dream about. So why bother making the sport safer?

There was also a movement of people who loved the sport just as much, but didn’t think the casualties had to be part of it. Drivers like Alain Prost (one off the biggests rival of Ayrton Senna) and Niki Lauda, who where front runners in their time and put in a lot of effort to make the sport safer.

Of course Senna also knew about the dangers of the sport he loved so much. But “I can’t stop it, I have to race” he told F1 medical doctor Sid Watkins on the day of Ratzenberger’s crash, right after dr. Watkins friendly asked him why he didn’t stop racing to get into fishing together. Little did Ayrton knew what was bound to happen the very next day.

“If you have God on your side, everything becomes clear.”

Now we are wondering, what is it that makes the sport so attractive and specifically, what is the relation between danger and the likability of the sport. Is danger inherent to the sports magic? As we look at the sport as it is today, it seems like quite a safe endeavour, for instance it is safer than driving on the highway with your own car really. But despite the losses over the years, we tend to think that Formula 1 would never have become the sport it is today if it weren’t for the heroes that put their lives on the line, with an unfortunate fatal ending in some cases.

Sometimes a rookie driver enters the pinnacle of motorsports and is being compared to the master Ayrton Senna himself. But most drivers don’t like to be compared to him, as he his, and always will be THE legend. Or are they keeping his spirit and myth alive?

Senna, who has put such a mark on Formula 1 and is seen as the best F1 driver ever, is still remembered by lots of racing fans all over the world on the day he died, May 1th.

We watched some videos and documentaires to get that Senna feeling, but this wasn’t enough and we felt we needed to go to Imola to see for ourselves how this man could have had such an impact and are curious to feel what so many others feel when they’re mourning at this memorial place especially made for him.

Charrel was in Italy and took a detour to feel for himself what is so special about this Formula 1 legend. It made an incredible impact on him, as the track and everything around still lives and breaths Ayrton Senna. 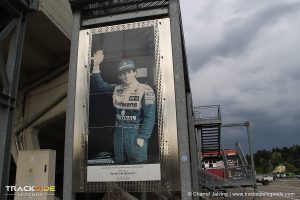 On route to the circuit we decide to once more play some videos of that weekend. As mentioned earlier, one of the darkest weekends in F1 started off with the massive crash of Barichello, followed by Ratzenberger the day after. In the video’s leading up to Sunday, you can just feel the tension, it is seen in the eyes of the drivers and heard in their voices.

When driving into the town of Imola, we put away our phone, already filled by emotions after seeing the fatal crash of Ayrton Senna on video, as he was being airlifted and seeing the emotional reactions of the drivers and team bosses.

In 1994 we were too young to follow/watch Formula 1, but when looking back at old races and other videos on YouTube, you just know, you feel there was something special about Ayrton. The way he moved, the way he talked, the way he cared about other drivers and their safety, but even more his abilities on track. Becoming one with the car and putting everything on the line to cross the finish line first.

One more left turn and the circuit pops up in front of us, shivers go down our spine. Autodromo Enzo e Dino Ferrari, we have arrived on what fans call: F1 holy ground. So much history in this sport. 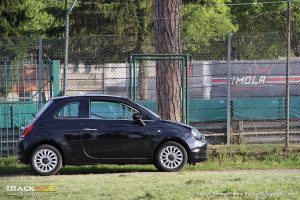 We quickly park the car behind one of the grandstands. This weekend there is some historic motor racing event, so the sound of the old motorbikes racing on the track is just right. We immediately see there is a lot of green around the track, also on the inside part of the track there are quite a few houses, and even some sport clubs. We see a tennis court, a running track and other sports facilities arround the track.

After looking at the the bikes passing on the straight, we decide to walk to the Senna memorial. On our way to the sight I think about this weekend in 1994 a lot, I also think about what if.. what if Senna would still be alive right now. How many world titles would he have, how many wins? And would he maybe be a teamboss at a Formula 1 team right now?

I wonder if I will get emotional when arriving at the scene where Ayrton took his last breath, the place where many people remember this legend. As we get closer you can see there is a Brazilian flag hanging on the fence on the outside of the track, right where his car impacted the wall. Nowadays there is no visible concrete wall, but I suppose this must be the place where his fatal accident occurred. 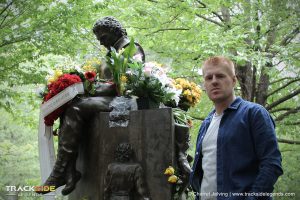 When we walk a little further you can see a lot of flags, posters and many other sweet reminders of Ayrton hanging up on the fence. Even 25 years later he is a popular part of Formula 1. His memorial statue is filled by lots of beautiful flowers, just a few days before there was a Ayrton Senna memorial day, so a lot of fans paid their tribute. We’re quite overwhelmed by all the memories people left behind, it gives us goosebumps walking around this scene.

This is one in the feels.

After taking a moment of realisation, we look around us and see many people paying their respects to this great driver. Fans are making pictures, looking at all the flags up on the fence, or just sitting on a bench near the statue thinking about Ayrton. We also make some pictures and after about 10 minutes we decide to go back to the car, we take a moment to drive around the circuit and also check out the other parts of the track.

When we leave Imola again, we once more we think about the “old days” of Formula 1. 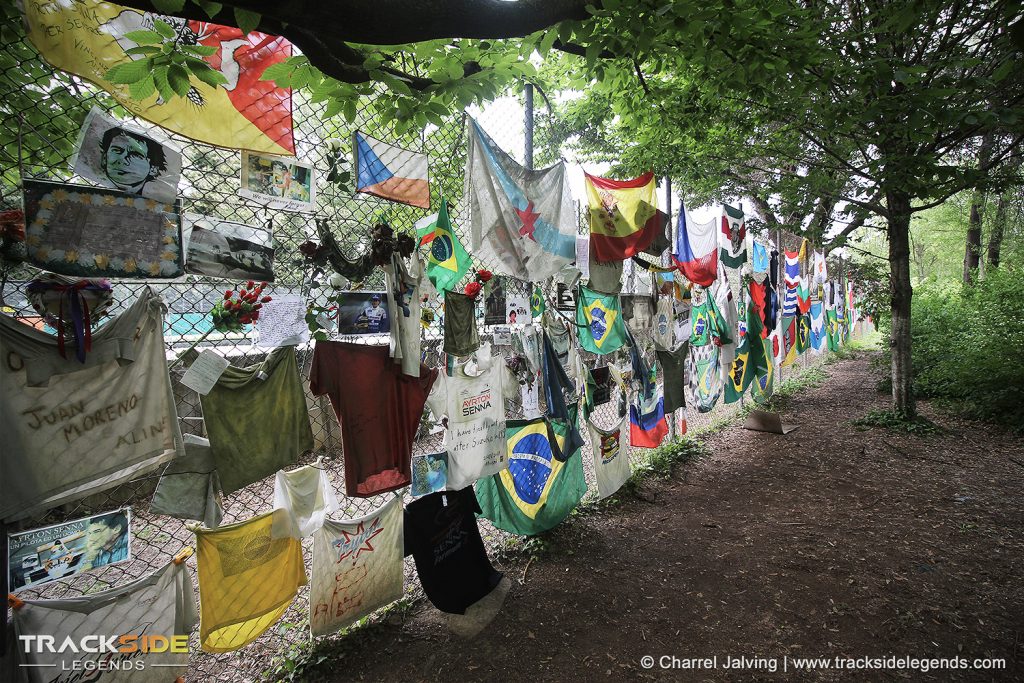 “And suddenly I realised that I was no longer driving the car consciously. I was driving it by a kind of instinct, only I was in a different dimension.”

The fatalities in the past tell the story of real heroes and their determination, hunger for performance, speed and thrills. The sport evolved and became more and more commercial over the years, with sponsors and shareholders that did not like to explain why someone died in ‘their’ car.

We come to the conclusion that the casualties are an important part of the history of the Formula 1 till this day. We will never forget those who risked everything, to bring sports and entertainment to the people. Luckily the sport is safe now and still ever evolving, with the virtual safety car and halo as the most recent developments. Let’s cross our fingers, remember those we have lost, cherish them and pray we will never have to experience a fatality in motorsports ever again.

Ayrton Senna da Silva was a Brazilian racing driver who won Formula One world championships for McLaren in 1988, 1990 and 1991, and who is widely regarded as one of the greatest Formula One drivers of all time. He died in an accident while leading the 1994 San Marino Grand Prix for Williams.

Other articles about Ayrton Senna