Niels Langeveld immediately quick with the Mazda MX5 cup at the DTM weekend in Assen! 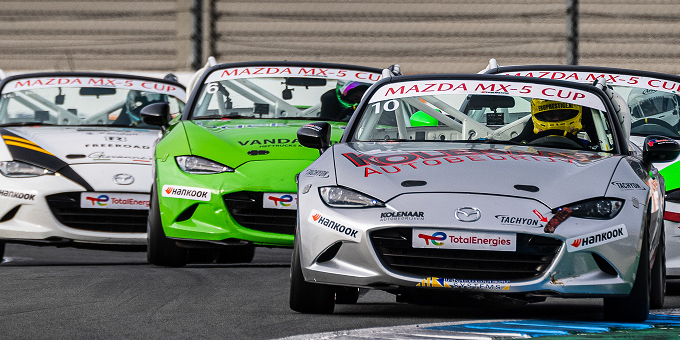 At the last minute, Langeveld was asked to participate in a guest race in the Mazda MX5 cup at Assen. And that was not without merit, with a Pole Position, a second and fourth place Langeveld was able to compete at the front during spectacular races.

“What a fight and what a lot of fun this was.”

On Wednesday, Langeveld was asked to participate. He didn’t think twice and traveled to Assen on Thursday for the DTM weekend. Langeveld: ”Otherwise I’ll be at home for a weekend, which is nothing if there is racing. I know the Mazda MX5 cup because old friends race in it and the races are also super cool to watch because it’s so close.”

During the training sessions Langeveld was already in good shape, which paid off during qualifying where he dominantly took the Pole Position. Langeveld: ”I had to get used to it because I had never driven the Mazda before and we only had twenty minutes of free practice twice. But the Mazda MX5 drives so tight that you get used to it very quickly. Slip streaming is very important and because of that I was able to grab the Pole Position. That is awesome!”

During the competitions, a spectacularly strong example of car racing took place. In the first race, the first ten are reversed, so Niels had to start from P10, but after a few laps he was already on P2. Then there were constant penny changes for the head. It was impossible to say who was going to win the match because it remained exciting and close until the finish. In the end Langeveld crossed the finish line in second place in race one. In the second race, the titanic battle repeated itself again. Langeveld didn’t get away from Pole Position well but quickly regained the lead. Then Langeveld was fourth in the last lap where he also finished.

Langeveld: ”What a fight and what a lot of fun this was. In race one I just couldn’t hook up on the last few laps due to a slipping clutch. With a bit of luck and a good last lap I was still second. In the second race I couldn’t control the race enough in the last few laps. Because of this, I had to wait and see what happened in front of me and I couldn’t take advantage of the slipstream. In the end I came fourth. The level is also very high in this cup and that is why you have to read the race carefully to strike at the right time, that was a learning moment for race two. I really enjoyed it and have to say, this tastes like more actually… I would like to thank the sponsors who made this possible”.

Soon the summaries of the races will be shown on RTL7.

Langeveld has little time to recover as he will be heading for his fourth consecutive race weekend this weekend, this time for TCR Europe at Monza.