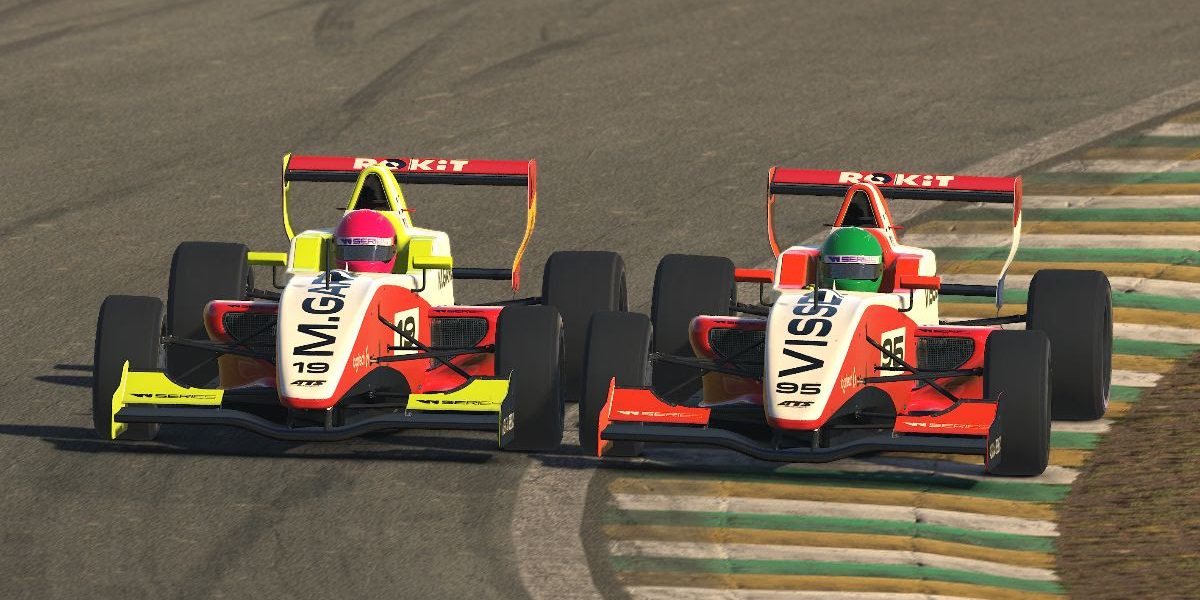 Beitske Visser produced a record-breaking performance at Autódromo José Carlos Pace, Interlagos, Brazil, to extend her lead at the top of the W Series Esports League.

The Dutch driver won the first and third races from pole position, came from last on the grid to second in the reverse-grid race, and set the fastest lap in all three races to score 60 points out of a possible 63 – a record total for a single W Series Esports League round.

Beitske, 25, is now 52 points clear of Irina Sidorkova in the W Series Esports League table, after outscoring the 17-year-old by 25 points at Interlagos. A spin at the start of race one put the Russian on the backfoot, but she recovered well to win the reverse-grid race and finish third in the final race.

Marta Garcia moved from fifth to third in the W Series Esports League table after continuing her run of scoring more points in every round so far. The Spaniard, 19, finished second in the first and third races, and fifth in the reverse-grid race for a total of 45 points.

Marta is now 32 points behind Irina and six clear of Caitlin Wood in fourth. The Australian scored 35 points at Interlagos, a tally that was matched by Tasmin Pepper. The South African claimed her first W Series Esports League podium in the reverse-grid race to move up one place to fifth in the League table.

The W Series Esports League table after round four is as follows:

Beitske Visser: “This was pretty much the perfect round for me. In the first race I got pole position, had a very nice battle with Marta [Garcia] in the first few laps, where we had some great side-by-sides, and then I managed to pass her. In the reverse-grid race I took the same approach as at Brands Hatch last week – to take it easy at the start and avoid the chaos to prevent damage. That got me up to second which was great but Ira [Sidorkova] was too far away. In the final race I got pole position again and managed to do a good start for once. In the early laps I was really pushing and overheated the tyres a bit, but they were coming back at the end so I could make the gap a bit bigger. Belgium’s Spa-Francorchamps hosts the next round – a track that everyone knows and likes. With the long straights it’s going to be cool, but there will be lots of slipstreaming and fighting so it won’t be easy to keep up my winning form but I’ll be trying hard.”

Beitske beat Marta to pole position by two tenths of a second, but the Spaniard made the better start and took the lead at Turn One. As the pack snaked their way downhill to Turn Two, a spin relegated Irina from sixth to 18th. The top two were jostling for position, allowing Caitlin in third and Nerea Marti in fourth to take closer order, but just as they did Nerea spun. With 10 of the 15 minutes remaining, Beitske finally made a move on Marta stick through an opportunistic lunge at Turn Three. From there, Beitske eased clear and the top three retained their starting positions at the chequered flag. Ayla Agren scored her best W Series Esports League finish in fourth, while Gosia Rdest and Jessica Hawkins followed her home having made up five and seven places respectively.

Irina Sidorkova: “I’m really sad about the first race because I had some contact with Alice [Powell] early on and hit the wall which put me down the order and out of the points. That meant the task was the same as at Brands Hatch last week for the reverse-grid race – to have a good start, take first place and maintain good pace, all of which I did. Beitske [Visser] was too fast for me in the third race and has extended her lead over me at the top of the W Series Esports League. But we’re not even halfway through the season yet so there is plenty of time to close the gap, starting next week at Spa-Francorchamps.”

Naomi Schiff made a great start from pole position in the reverse-grid race, but it counted for nothing as she spun at Turn Two. That put Irina into the lead and she was three seconds ahead of Abbie Eaton and Bruna Tomaselli at the end of the first lap after they struggled to pass Vicky Piria. They managed it as they crossed the line to begin lap two, by which time Beitske and Marta had safely negotiated their way from the back row of the grid to the top 10. With 11 minutes left, Bruna collided with Abbie approaching Turn Two, sending the Brazilian down the order and Abbie to third behind Nerea. But, with her car damaged, the Briton couldn’t hold the position and was passed by Tasmin and Beitske a minute later. Beitske breezed past Tasmin on the start-finish straight to take third and then, with half of the race remaining, she overtook Nerea for second. As Irina was nine seconds up the road Beitske had to settle for second, and Tasmin completed the podium after forcing a mistake from Nerea who ran wide at Turn Four.

Marta Garcia: “I qualified second for race one, had a good start and took first place. Then I had some good fighting with Beitske [Visser] for the first three laps before she passed me. She was really fast so second was a good result. In the previous reverse-grid races I’ve been trying to really go for it at the start, but I realised I couldn’t do that because there are a lot of crashes. For this race I stayed calm and let the early laps play out. After that I managed to do good work and finish fifth so I’m happy with that because reverse-grid races have been a struggle for me. I qualified second again for the third race, got a good start and managed to hold my position. Beitske was really fast again so I couldn’t get her.”

Just as in qualifying for race one, Beitske edged out Marta for pole position. But Beitske made the better getaway on this occasion, easily leading into Turn One where Marta and Irina bumped wheels. The Spaniard came out on top to retain second place at Turn Two, but that battle allowed Beitske to build a one-second lead at the end of lap one. That was the end of the wheel-to-wheel action at the front as Beitske managed her pace and the top three held their positions until the end of the 20-minute race. The packed midfield provided the drama, and several drivers were involved in collisions as they fought to make it into the top 10. Belen Garcia emerged as the biggest winner from those battles, going from 18th on the grid to eighth.

Ayla Agren: “I really enjoyed Interlagos. I’ve never been there in real life so getting used to the track took a long time and I did lots of practice races to know where the offs are and where people rejoin the track. Having that knowledge really paid off. Like Interlagos, the only thing I’ve seen of next week’s circuit, Spa-Francorchamps, is on iRacing so I’m excited to race there in the W Series Esports League. The goal will be the same as this week – to finish the races. That’s been the biggest struggle for me so far, so I’ll keep focused on that and the speed will come.”