Why Rinus Veekay may be Holland’s next Indy 500 winner 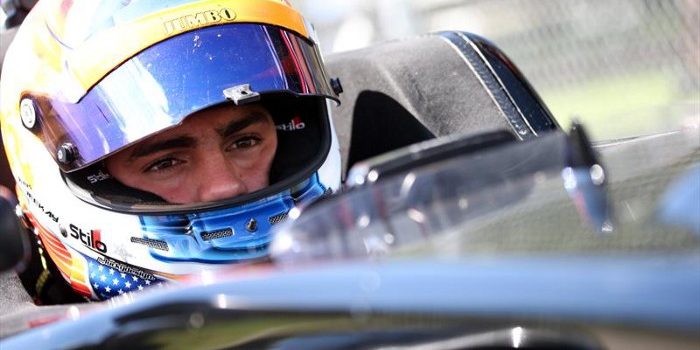 It is a big day for Rinus Veekay today, as the Dutch youngster is about to run his first ever IndyCar test at Portland International Raceway. To celebrate the occasion, we now republish a text on young Rinus, written by our contributor Jeroen Demmendaal back in 2017 when the talented Dutchman had only just started his American racing career. It has turned out to be a prophetic text, describing many of the qualities that have come to define Rinus Veekay as a racing driver in recent years.

“It is a big day for Rinus Veekay today”

For those like myself who saw his father race in the 1990s, it may come as something of a surprise that Rinus van Kalmthout (aka Rinus Veekay) has emerged as arguably the most exciting Dutch racing talent in recent years. While Marijn van Kalmthout was quite successful in Dutch and Benelux Formula Ford, his career never developed much further beyond that level. Yet like Max Verstappen, Rinus seems to be a new and improved version of his father, who now provides him with guidance and advise. His ambition to become the second-ever Dutch Indianapolis 500 winner, following in the footsteps of the legendary Arie Luyendyk, is more the result of smart calculation than hubris.

In interviews Veekay refers to Luyendyk and defending IndyCar-champion Simon Pagenaud as examples and tutors on how to secure results. Those references are telling: it reveals that Rinus Veekay is a damn smart racing driver who is a lot more mature than his 16 years of age suggest. He seems to understand, like Luyendyk and Pagenaud did, that the road to success is often travelled by focusing on consistency above everything. Raw speed is all very well, but if you overexert your material, can’t manage your tires or end up off the track too often, it will not yield results.

That lesson Veekay has learned already now. Throughout this season in the USF2000, the entry level of the three-stage Mazda Road To Indy support ladder under the IndyCar Series, his races have been characterised by consistency and patience. You could argue that he has won ‘only’ two races, whereas his main competitor for the title Oliver Askew has secured an impressive seven wins thus far. Yet Veekay has closely followed Askew, with eleven podiums in thirteen races and no finishes outside the top-six. He makes no mistakes, does not damage his car, qualifies well enough and rather settles for second or third than trying a do-or-die move for the lead. It’s such consistency that took Pagenaud to the IndyCar title in 2016, and that helped Luyendyk finish an incredible 7th overall in the IndyCar series while driving for Ron Hemelgarn’s shoe-string operation in 1987.

“‘Veekay’ is catchy, provides an intriguing backstory and allows him to blend in easier”

Veekay’s focus on the United States is unusual for a European driver his age, but it once again demonstrates his intelligence and what some would call business smarts. Veekay knows that on the overly crowded European racing ladder, he will have to fight off a number of other aspiring drivers who all want to be the next Max Verstappen. He is very aware that other high-flying youngsters of his generation like Richard Verschoor, Jarno Opmeer and Job van Uitert are direct competition when it comes to reaching the highest level. In the US, on the other hand, he has the field pretty much to his own, at least when it comes to securing Dutch support.

In another smart move that reminds of Robert Doornbos’ rebranding of himself as Bobby D back in the late 2000s, Veekay has realised that his very Dutch last name might be something of a tongue-twister for Americans. Hence Van Kalmthout became Veekay, which does not only wins him sympathy from American race commentators but also represents the first step towards proper personal branding. ‘Veekay’ is catchy, provides an intriguing backstory and allows him to blend in easier.

As everyone who has ever attempted a racing career knows, securing solid financing is key in order to progress. You could argue Veekay has been fairly fortunate there: he is the scion of a sizeable and successful car dealership business in the Netherlands (until recently run by his father), which helped his entry into karting. Having said that, numerous youngsters try their hand at karting with some help from the family business, but without any notable success that allows them to carry on their fledgling career.

Veekay’s results on the other hand speak volumes: he has been able to enter the Mazda Road to Indy in no small part thanks to the series’ own talent spotters who were impressed with Veekay’s excellent performances on the US karting scene and the European scene before that. Those performances also landed him the support of Dutch racing association KNAF via its Talent First programme, as well as the financial support of Dutch supermarket chain Jumbo.

At first sight it might seem odd for a Dutch grocer, without any business in the United States, to put its logo on a race car in a US-only series. But Frits van Eerd, chief executive of Jumbo, a racing enthusiast and a former racing driver himself, recognises an opportunity when he sees one. Van Eerd was an early supporter of Formula One star Max Verstappen, and he was part of a group of Dutch sponsors that supported Doornbos’ ChampCar career a decade ago. His support for Max Verstappen is tightly linked with values such as pride and sympathy celebrated by Jumbo.

Van Eerd likely sees Veekay as the next big thing to boost his business, even if he drives in the United States. After all, in today’s hyper-connected world, it is easier than ever for Dutch race fans to follow their countrymen wherever they compete. Also, compared with Formula 1 and the European development ladder, the budgets in American open-wheel racing are relatively easy to cough up for a large firm like Jumbo, which reported revenues of over 6.5 billion euros in 2016. While it plays a small role within Red Bull, as a personal sponsor to Max Verstappen, Jumbo’s support for Veekay goes a long way in the Mazda Road to Indy.

This demonstrates another interesting parallel between Veekay and his hero Luyendyk. Like Veekay’s relationship with Jumbo and Van Eerd, Luyendyk’s career in the US gained traction thanks to his partnership with Dutch-American entrepreneur Aat Groenevelt and his Provimi Veal business. A self-made man like Van Eerd with a successful veal business, Groenevelt saw racing as a platform to further grow his firm and provided Luyendyk with the necessary funding to launch a successful bid for the SuperVee championship in 1984 (a precursor to today’s Indy Lights). After making his IndyCar debut in 1984 Luyendyk moved to IndyCar full-time in 1985, took Rookie of the Year honours, came 7th in his first Indy 500, impressed everyone, and the rest is history.

So where next for Veekay? Since his debut season in USF 2000 has been so impressive, it is fair to say that he is among the most promising youngsters in the whole Mazda Road To Indy ladder. Granted, his rival Askew is also a USF 2000 rookie and is leading the title battle ahead of Veekay, but is more experienced at age 20. What is clear is that both Askew and Veekay are miles ahead of the competition and show bags of raw speed.

Some will argue that it is important for young drivers to complete at least two seasons in a series, in order to learn how to be more consistent and make less mistakes — Colton Herta in Indy Lights is a good example. But on current form it is hard to argue that Veekay needs to gain more experience in USF2000, or iron out smaller mistakes, since he hasn’t made any. He is a proven winner, may very well win the title on his first attempt and regardless of whether he does so, seems ready for the next level.

Which makes Pro Mazda a logical next step for Veekay. The cars are more powerful than the USF2000 machines, providing a new challenge — in fact, in terms of power output the Pro Mazda cars are probably closest to the SuperVees that launched Luyendyk’s career. But given that he is learning so quickly, he should come to terms with Pro Mazda fairly quickly. Plus he has time on his side: he only turns 17 next month.

Over the coming seasons Veekay will have to prove time and time again that he has what it takes to rise to the very top. Furthermore, it is always dangerous to put too much expectation on such a young man. Yet the early signs are very promising: he seems blessed with the natural talent that makes every race car fit like a glove within no time, as well as a bright mind and a patient yet determined character. Combine that with the financial backing of sponsors like Jumbo and the guidance of his father and his childhood hero Luyendyk, and chances are that we celebrate another Dutch Indy 500 winner before 2025.

Jeroen Demmendaal (1983) is a Dutch writer and communications expert, who writes fluently in both Dutch and English.