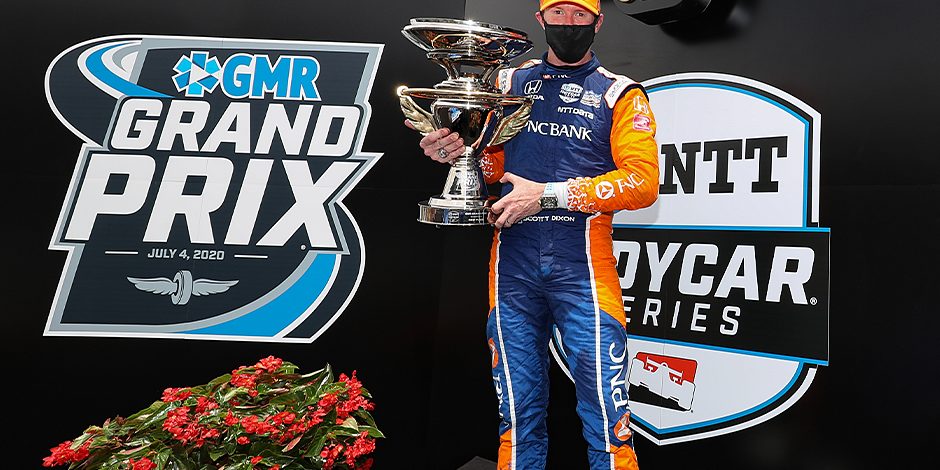 Dixon benefited from a well-timed caution period near the midway point of the race and then drove away to dominate the NTT INDYCAR SERIES race Saturday on the 14-turn, 2.439-mile road course at the Indianapolis Motor Speedway, winning by an event-record 19.9469 seconds in the No. 9 PNC Bank Chip Ganassi Racing Honda. It marked the first victory in this event for the five-time series champion Dixon, who had finished second in this race for the last three years.

“The strategy, the team just nailed it.”

“So good to be racing here again at the Indianapolis Motor Speedway,” Dixon said. “We’ve had so many runner-up spots here on the road course. We got lucky. The strategy, the team just nailed it. We got lucky with that caution. But as soon as we got the balance right, the PNC Bank No. 9 just checked out.”

Dixon stayed perfect in the 2020 season, as he also won the season opener June 6 on the Texas Motor Speedway oval. Saturday’s result was the 48th career INDYCAR victory for Dixon, who is now just four wins behind Mario Andretti for No. 2 on the all-time series list.

Graham Rahal finished second in the No. 15 Fifth Third Bank Honda after making just two pit stops, one fewer than Dixon and the other contenders. Simon Pagenaud rebounded from a tough qualifying session Friday, jumping from a 20th starting spot to finish third in the No. 22 Menards Team Penske Chevrolet.

Colton Herta finished fourth in the No. 88 Gleaners Food Bank of Indiana Honda, while Rinus VeeKay bounced back from a tough debut last month at Texas to become the top-finishing rookie in the race, with a fifth-place result in the No. 21 Sonax Chevrolet.

Dixon earned his first victory at the Racing Capital of the World since he won the Indianapolis 500 presented by Gainbridge in 2008. He jumped into contention Saturday when rookie Oliver Askew spun exiting Turn 14 and backed into the SAFER Barrier on Lap 36, triggering the only caution period of the 80-lap race. Askew was uninjured in the incident.

When the caution flew, pole sitter Will Power led Team Penske teammate Josef Newgarden by 3.6495 seconds. But Power, Newgarden and other leaders had only made one pit stop, while Dixon made his second pit stop on Lap 33, two laps before the caution.

So, when Power, Newgarden and Jack Harvey dove into the pits for their second stops under caution, that elevated Dixon in the running order. Rahal led on the restart, with Spencer Pigot and Dixon second and third, respectively.

Dixon got around Pigot and then passed Rahal in Turn 1 for the lead on Lap 48. After that, he lost the top spot only when making his third and final pit stop on Lap 55. Dixon took the lead for good on Lap 62 after the leaders cycled through their final stops.

Then Dixon inexorably pulled away from Rahal and the rest of the field in a tour de force, delivering Chip Ganassi Racing its 110th INDYCAR victory. Dixon also became the first driver besides Pagenaud and Power to win this event, as the Team Penske teammates each have three victories in the IMS road course race that made its debut in 2014.