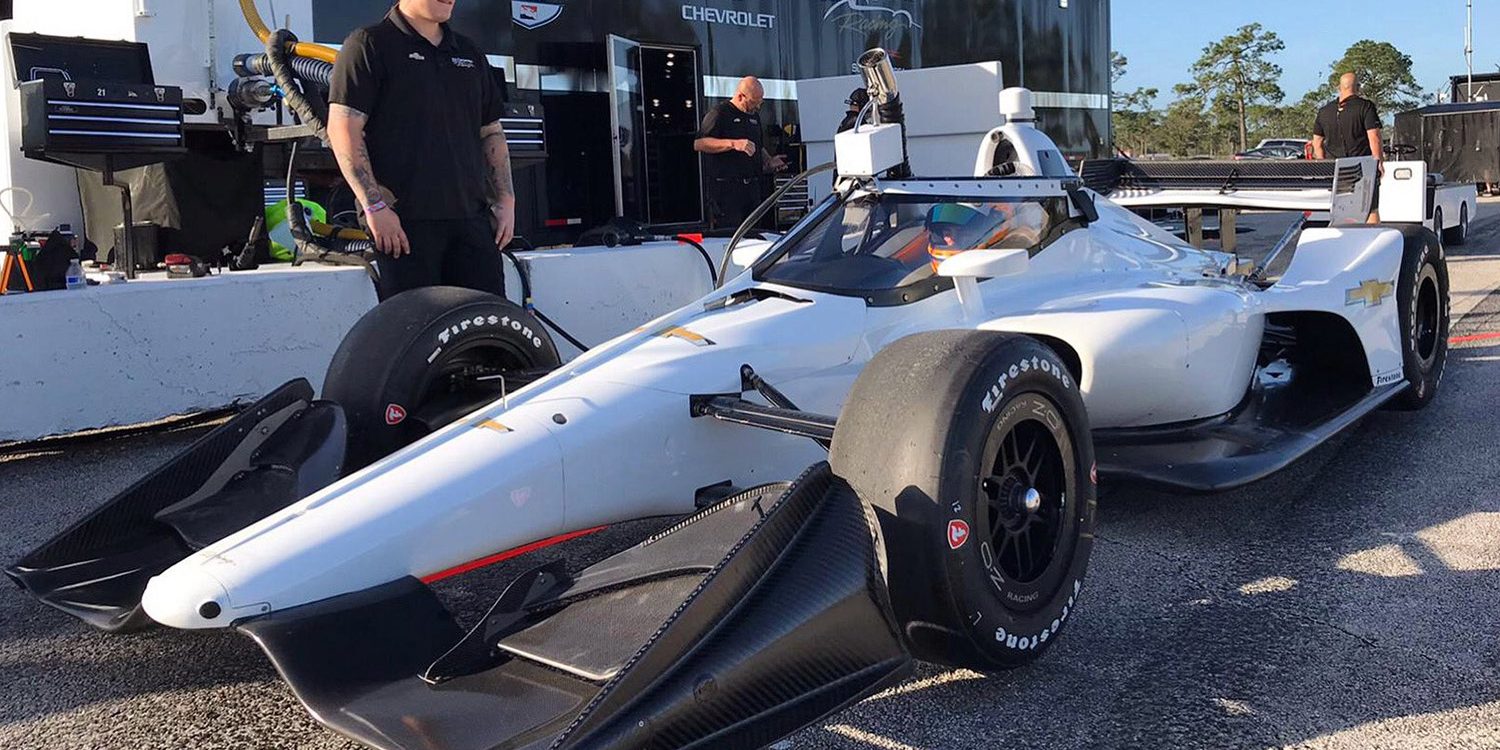 A helmet in screaming orange, a bright orange overall and a car white like the milk at Indianapolis: Rinus “VeeKay” van Kalmthout and his brand new team Ed Carpenter Racing have started the 2020 NTT IndyCar Series season in style.

They also started it at full speed: at this week’s official rookie test at Sebring International Raceway, the young Dutchman comfortably posted the day’s fastest time. His (unofficial) best time of 0:52,34 was over half a second faster than the best lap set by his perennial rival, Arrow McLaren SP’s Oliver Askew.

Trackside Legends contributor Jeroen Demmendaal had a quick chat with the Dutch Rookie of the Year-contender to reflect on a good day’s work in Florida.

“I really think we can turn some heads this year”

Congratulations: you topped the time sheets during your first official test of 2020. Once again, you left an excellent impression and the boss was happy!

“Yeah, it was a pretty good test! It was quite difficult to get back into the car again after three months, especially during the first few laps I had to find my bearings again. But we made the most of the day, got everything out of it that we could. Of course, there were only three other cars on track, but being fastest by six tenths is very good.”

Obviously, we are talking about a test session here and all the caveats that entails, but this must leave you with a good feeling for the season ahead.

“Absolutely, this feels really good. I also liked seeing that the people at Penske were paying close attention to me. You could tell that everyone else used me as a comparison base. It won’t be as comfortable as this in the races of course, but I do think we did very well – and I think I could actually have gone a bit faster!”

What did the day’s programme look like? It seemed like you managed to tick a lot of boxes on the to-do list: long runs, quick runs, pit stops, fuel saving, and so on.

“Above all we focused a lot on working on our set-up, and then after each run I had to give feedback to the team afterwards. That is what I focus on now, to keep getting better at that. I have a really good relationship with my engineer Matt Barnes: he was with me at the first test already, and he also joins me during the simulator tests. I am really learning a lot.

“I was very happy with how the pit stop practice went, especially. Of course I never did those on the Road to Indy, so this is another big step for me. When I tested at Mid-Ohio last year we also did some pit stops, but then it was so chaotic. I found it really difficult at first: there are so many things you have to pay attention to, my brain was on overload! I remember driving off after the first stop and thinking: oh man, how is this going to go? But this week at Sebring, it went perfect the first time. So yeah, very happy with that.”

You had a small off-track excursion during your first run in the morning: what happened there?

“Well, it is quite tricky when you get out on track at Sebring for the first time in an IndyCar, it is such a bumpy track. Normally I am a guy who gets up to speed very quickly, quicker than most other drivers. So here I was: had not been driving for three months, 19 years old and super enthusiastic. So I immediately tried to go all out during the first run.

“Then at one corner I went in a bit too wide on entry, and it was still early morning, so grip levels were still low. I spun and brushed the wall with my nose. Nothing serious, but the rest of the day I drove with a red nose – a bit like Rudolph the Red Nosed Reindeer, haha!

“Most of all, this was another real good lesson for me for when we head into race weekends. Then you have limited time and you need all the time you get in practice to collect data. So especially during the first training, it’s important to leave some room and not go all out immediately.”

What are you first impressions with regards to the aeroscreen? Any issues?

“Initially I was a bit tense, because they have added these cooling vents on the tub in front of you. I was not sure whether that would be an issue for visibility, and whether I would be sitting too low to see out of the cockpit. But frankly, during driving you don’t notice it at all. Not even the halo-like frame: you are just too focused on driving the car. Cooling is not an issue either, at least not while driving. It is a bit warmer when you’re in the pit lane, but overall I thought it was fine.

“There is a slight effect on the car’s handling, yes – we had anticipated that it would create a bit more understeer, so we already adjusted the set-up in the morning before we went out.”

“”Frankly, during driving you don’t notice the aeroscreen at all””

What is your view on the ‘aeroscreen vs halo’ discussion currently going on among fans?

“The thing is, Formula 1 doesn’t drive on ovals at 380 kilometres an hour. On a super speedway, at those speeds, a small screw bolt coming your way is like a bullet. So I think it is just fine with the aeroscreen. I did realise that getting out of the car is easier than getting in!”

You have a bit more testing and sim work planned this pre-season, including the COTA Spring Test in February obviously. What are your thoughts on the season ahead?

“Well, if you look at the results of Ed Carpenter Racing, in recent years especially, they did not always seem competitive enough. But having tested with them now, I just think there is so much potential in the car and in the team! I really think we can turn some heads this year. So I hope we can do a Colton Herta-like season: get some podiums and maybe even win a race.”

Jeroen Demmendaal (1983) is a Dutch writer and communications expert, who writes fluently in both Dutch and English.