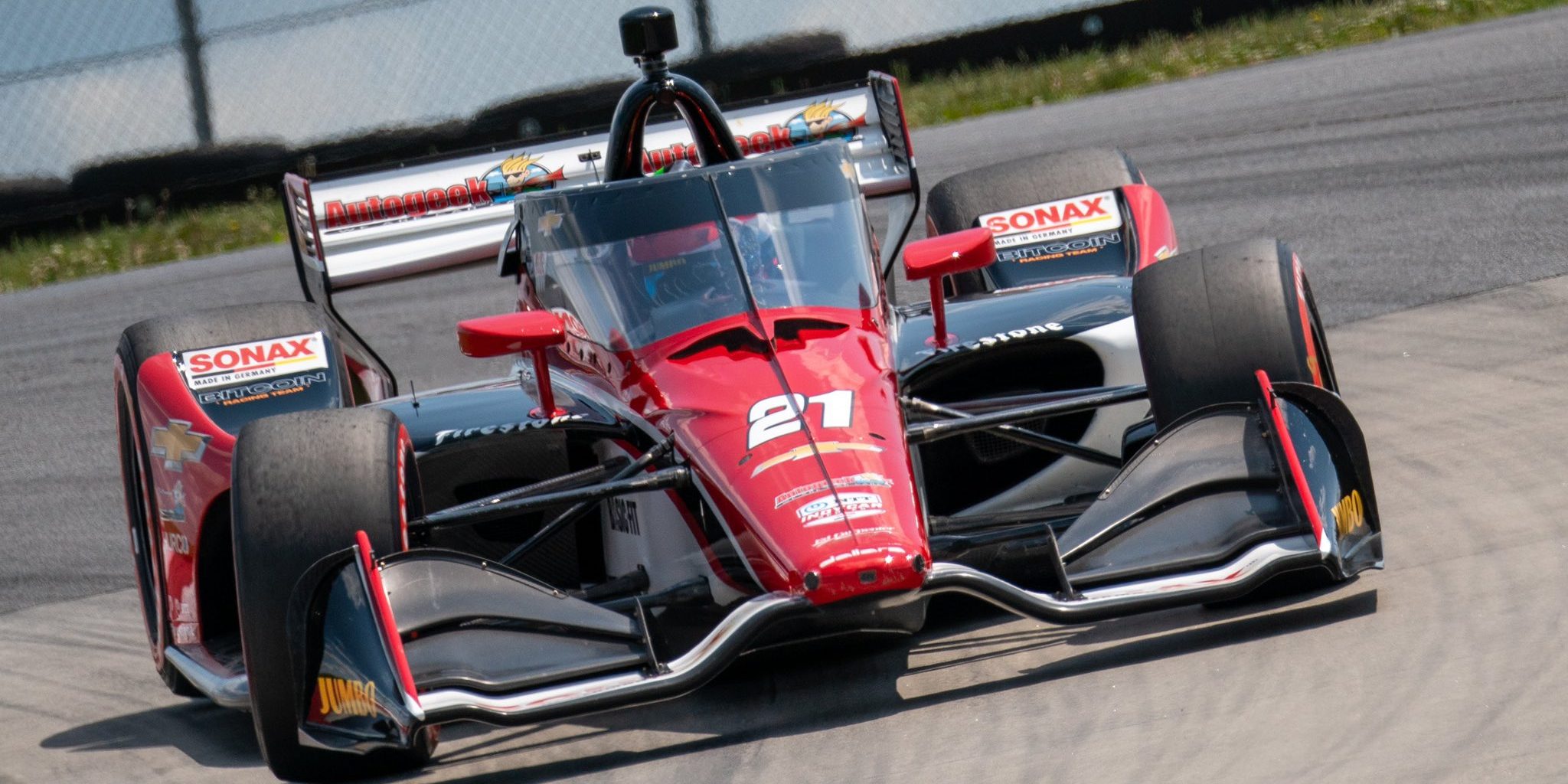 He didn’t do anything  wrong, but nevertheless Rinus ‘VeeKay’ van Kalmthout had to settle for seventeenth place after the fourteenth race of the NTT INDYCAR Series season 2021. The 21-year-old Dutchman had bad luck in Portland with the unfortunate timing of a neutralization.

“It sounds crazy for someone finishing 17th, but I had a really good pace today.”

All sessions for the Bommarito Automotive Group 500 presented by Axalta and Valvoline were completed on the same day. VeeKay and its NTT IndyCar competitors had to train, qualify and race on Saturday. In the first two sessions, the Ed Carpenter Racing team, for which VeeKay operates, appeared to have misjudged the set-up of their cars. As a result, VeeKay and his teammate Ed Carpenter only finished 22nd and 23rd in qualifying.

From the twelfth row, VeeKay fought his way forward in his signature daring way behind the wheel of the #21 SONAX Chevrolet. Within two laps, VeeKay had already passed seven opponents – after the first neutralization, which proved necessary after an incident involving two of VeeKay’s competitors, the Dutchman found himself in fourteenth place. The red-black ECR car overtook the opponents left and right and was captured by the cameras as usual.

A top ten position seemed within reach for VeeKay as he could effortlessly keep up with the pace of the front runners. In no time, the Dutch driver overtook four more of his competitors, placing him in tenth place after fifty of the planned two hundred and sixty laps.

Unfortunately for the Fort Lauderdale Florida resident, it wasn’t to be his race at the World Wide Technology Raceway, where VeeKay took fourth and sixth place in 2020. After an accident involving teammate and boss Ed Carpenter, who lost control of his #20 USAF Chevrolet and hit the wall hard, VeeKay ran into problems in the chaos of the ensuing restart. The one-time IndyCar race winner touched Scott Dixon’s car, who in turn collided with Àlex Palou. This resulted for each of the three gentlemen in a blow into the concrete wall and a breakdown.

“It’s a shame that I had to get out early, because it went very well,” VeeKay told us from the United States. “Last year I noticed at Gateway that it is difficult to overtake during the race. A lot depends on the pit stops and the restarts. Last year I made a number of great steps forward and we really were in the flow this year. I think I overtook thirteen cars in just five laps racing under green.”

“Today the atmosphere on the track was tense. Before the restarts, there was an accordion effect, with the field being pulled apart enormously and then coming too close together again. This resulted in a number of incidents. Unfortunately, I got involved in one of those incidents.”

VeeKay knows it could have happened to anyone. “I was sorting for the inside lane of the first corner. In front of me, another rider suddenly went off the gas, because riders in front of him went off the gas. At such a moment there is very little you can do to prevent a touché. Midfield is dangerous on restarts and from my position – 11th place at the time – I was a passenger. Palou was also a victim of this whole event.”

After a rock-solid start to the NTT INDYCAR Series season, VeeKay has been struggling lately. “After my collarbone injury, I had a lot of setbacks. I hope the poison cup is empty now. The upcoming circuits suit me and so I set my sights on the races there. At both Portland and Laguna Seca I have won races in the Road To Indy. I will train very hard for the next three weeks to be optimally prepared at the start of the last three races”, concludes VeeKay combatively.

The 2021 NTT INDYCAR Series season will conclude with a West Coast trilogy in September. First of all, the Grand Prix of Portland is on the program. Coming September 12, one day after VeeKay’s 21st birthday, the Portland International Raceway will be raced in Portland, Oregon. The green flag is waved around 9.30 pm Dutch time.