Viscaal excels at Monza with Second and Seventh place 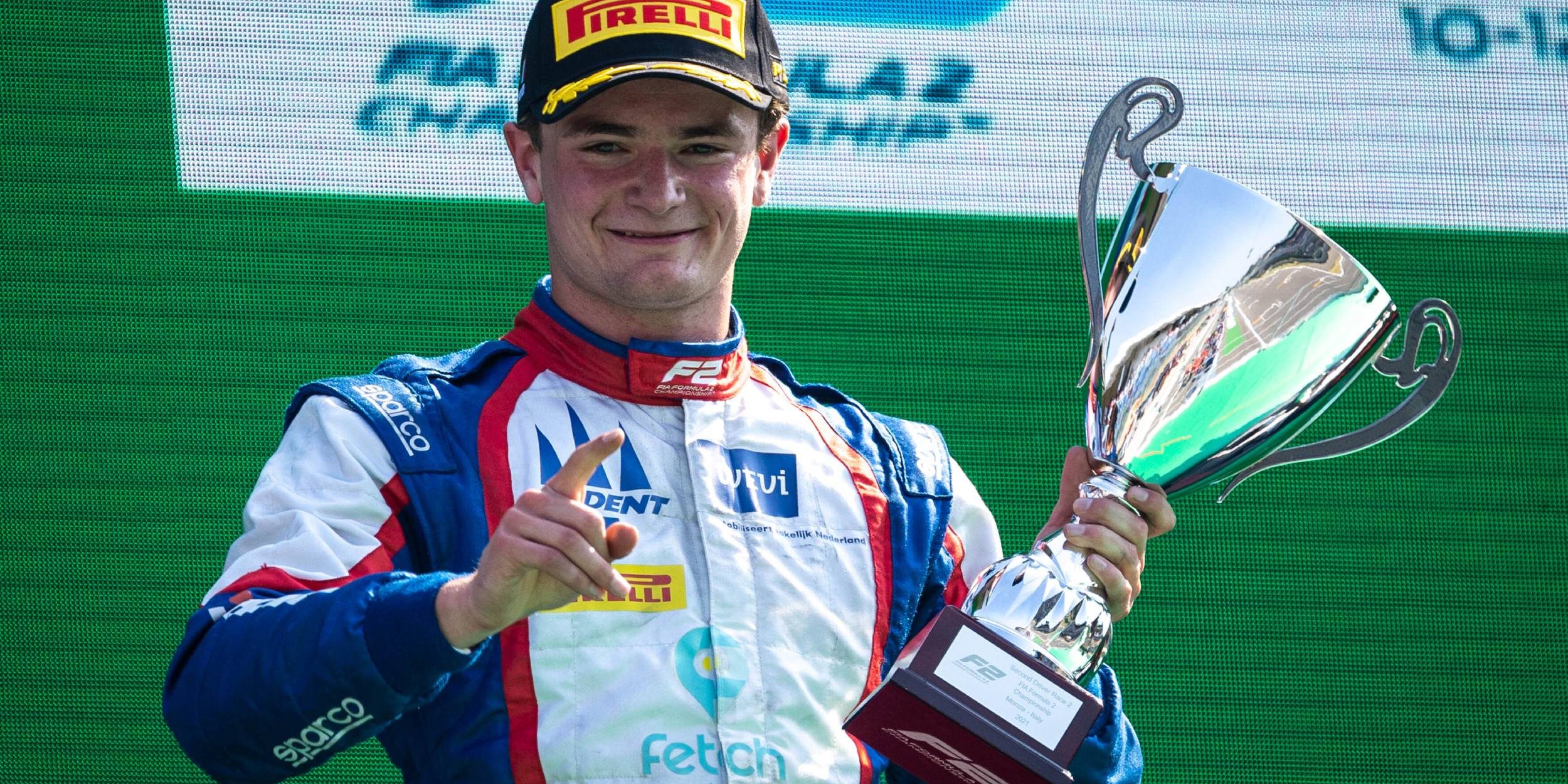 Bent Viscaal will go down in the books as one of the stars of the Formula 2 race weekend at the Autodromo Nazionale di Monza in Italy. The 21-year-old Dutchman, who shows his skills behind the wheel of a Trident Racing car, scored the first podium finish of his F2 career in his employer’s home race.

“The most important thing is that we scored fourteen points.”

Viscaal, who will make his debut in the Formula 1 training class this season, had to deal with a number of disappointments in the four race weekends that were organized before the summer holidays. Where the resident of Albergen and his team showed from time to time that they were able to parry the pace of the front runners well, several promising results were missed by Viscaal. A fourth place in the second sprint race in Azerbaijan turned out to be the best result of the first four race weekends.

During the summer holidays, Viscaal traveled several times to the Trident factory in San Pietro Mosezzo in northern Italy, to prepare optimally for the racing spectacle in Italy with the team’s mechanics and engineers. After an extremely long summer break of no less than eight weeks, the hungry Viscaal was finally allowed to get back into his racing car last Friday.

During the free practice on Friday, very decent lap times were recorded by the Dutch driver. Viscaal finished the practice session in a respectable eighth place. However, qualifying on Friday afternoon ended in disappointment. The result, an eighteenth position, prompted the team members to thoroughly examine the number 24 car before it was sent onto the track on Saturday morning for the first race of the weekend.

“Friday morning we got off to an excellent start, with eighth place”, Viscaal looks back. “I had good hopes for qualifying, but to our great disappointment it didn’t work out. It was in the last set of tires – on the first fast laps I set top ten times, but the last set proved impossible to get up to operating temperature.”

Formula 2 qualifying was particularly hectic. Several drivers drove around extremely slowly to create space for themselves. “This circumstance was the same for all Formula 2 drivers, but I have had a particularly difficult time with it. All those slow-moving drivers made it difficult to choose the right hole, which made the tire warm-up process more difficult.”

Viscaal nevertheless faced the first game on Saturday morning with a fighting spirit. Starting from eighteenth position, the Tukker worked his way up to fourteenth place within a few hundred meters before having to make an evasive manoeuvre. A debuting opponent lost control of the steering wheel, whereupon Viscaal was forced to drive through the grass to avoid a collision. As a result, the talented twenty-something lost five places.

With the knife between his teeth, Viscaal fought his way to thirteenth place in no time, before making up six more places. The overtaking action on opponent Vips, who was leading in the early stages of the race, was loudly applauded by the race-loving public. After a fair amount of wear and tear, Viscaal finished in a respectable seventh position, immediately collecting two points for the championship.

“Obviously, if you make a good start, it’s extra sour if you have to swerve because someone else makes a mistake. At such moments you have to take into account that it is the way it is, and then keep your head up and go for new overtaking actions. The car was like a train on rails, it went great. I was able to keep up with the fastest drivers and overtook the guy who was in first place earlier in the race towards the end of the race. When they got back to the garage, the entire team was very happy – Trident has had some tough years and a points score at the home race meant a lot to them.”

While Trident was already in a jubilant mood on Saturday morning, it got even better in the afternoon after the second sprint race. Thanks to the inverted grid system, Viscaal was allowed to start that race from fourth place. At the start, the young Tukker outwitted one opponent, only to surpass a second competitor in the final phase. With a second place at the finish, Viscaal achieved the best result in his still early Formula 2 career. For him it obviously meant the first podium in this training class; for the Trident team, it was the first trophy capture since Luca Ghiotto won a race in Malaysia in October 2016.

“I have already said a few times that it would be a matter of time. The pace we drove in Bahrain and Monaco was very promising, luck was not on our side then. In Azerbaijan we rode at the front and on Saturday afternoon at Monza we got another chance. We grabbed it with both hands. It is so incredibly nice to score a beautiful result in this very competitive Formula 2 field. I dedicate this podium finish to all of the Trident team members who have been working so incredibly hard behind the scenes this year. We had some bad luck together, but now we can finally party together.”

In the last race of the weekend, which was held on Sunday morning, Viscaal had to start from eighteenth place again due to the qualifying rule. The Dutchman again cut like a hot knife through butter and seemed on his way to a third points finish, until an overconfident competitor knocked him out of the race. As a result, the weekend ended with a setback, although satisfaction predominates.

“If you look at the images from Sunday morning, you can see exactly what happened. It’s a shame it had to end like this, but I can’t blame myself. I am very satisfied with the speed we have shown. It’s a tribute to the work so far to finally take home a trophy. There are still some areas for improvement and we should not close our eyes to that – look at qualifying for example. The most important thing is that we scored fourteen points.”

Viscaal helped Trident Racing achieve its best weekend score in five seasons at Monza. Moreover, the gap with opponent HWA has been considerably enlarged, where the Italian racing stable has approached its competitor Charouz Racing on two points.

Bent Viscaal would like to thank its partners, Volker Wessels, Fetch Car Sharing, Wevi – mobilizes the Dutch business community – and Viscaal Transport for helping to make the race weekend at Monza possible.

The 2021 Formula 2 season will continue at the Sochi Autodrom in Russia. Three competitions will be held in the seaside resort on the Black Sea in two weeks.